Browse: Home   /   Abolition and the Radical Imagination in LA – A Powerful Success 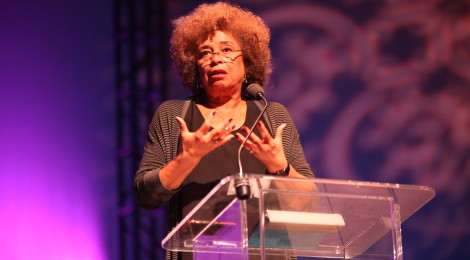 Abolition and the Radical Imagination in LA – A Powerful Success

admin / May 12, 2016 / Comments Off on Abolition and the Radical Imagination in LA – A Powerful Success / Uncategorized

You can see pictures from the event here.

On Saturday, February 20, Critical Resistance and our ally Los Angeles Poverty Department hosted 1,000 people in LA for Profiles of Abolition: Abolition and the Radical Imagination, a public conversation with powerful firebrands Dr. Angela Y. Davis, renowned poet Fred Moten, and political printmaker Melanie Cervantes of Dignidad Rebelde, moderated by acclaimed historian Robin D.G. Kelley. The event was a wild success, rich with powerful conversation inspiring us to fight for a world without the PIC. We’re so thankful to our guests, donors, speakers, volunteers, and allies who turned out, and are excited to continue fueling our vision for Los Angeles, away from imprisonment and towards community empowerment, health, and liberation.

As John Malpede of LA Poverty Department reminded us,  “The Radical Imagination is alive and well in Skid Row Los Angeles, and if it weren’t for this radical imagination and resistance, Skid Row would have disappeared long ago, to the hands of developers and finance,” scratching the surface at what was to follow: a riveting performance by LA Poverty Department on resisting and recovering from the violence of policing on Skid Row, the long trip to prison in shackles, and a powerful narrative from solitary confinement.

We were honored to have Dr. Davis highlight the significance of Critical Resistance in advancing not only the vision and strategy of abolition, but the landscape for visionary radical social change. “Since the first conference in Berkeley in 1998, Critical Resistance has made a major contribution charting the way for radical movements, all radical movements!” Angela Y. Davis rallied the crowd with fiery movement history and sharp analysis, providing all fighting today with ammunition to strengthen and grow.

We surpassed our political goals, from urging all to join our fight against new jails in LA, to rallying our comrades and allies already deep in the fight and helping garner resources for LA Poverty Department and CR. Attendants contributed powerful testimony against the jail expansion plan at our TAKE ACTION table, engaged CR and LAPD organizers in dynamic conversations about policing, imprisonment, and abolition, and donated meaningful gifts small and large to CR and LAPD. Together we raised over $24,000 for Critical Resistance and Los Angeles Poverty Department, a strong signal that our work is supported, inspiring and resonant with the direction Angelenos want to direct our future.

If you missed the event, you can still give online here, and select “LA Event Sponsor: Profiles of Abolition” under the Designation drop down menu. Your donations will support both LA Poverty Dept and the whole of CR!