Making Gains in 2012: No More Jails and Prisons! 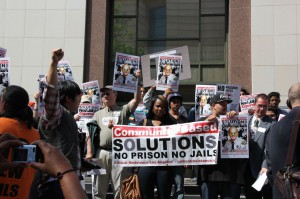 In January we worked with other CURB members (including our long-time sister organization in Los Angeles, Youth Justice Coalition) to turn out hundreds of Los Angeles residents to resist the LA County Board of Supervisors’ approval of a $1.4 billion (before interest!)  expansion of its already massive jail system.  Dozens of young people of color kept an energetic crowd engaged for hours, spoke to media outlets—with a combined audience of over a million—and delivered powerful testimony to the Board.  And just last week, we did it again.

Several months later, at a moment’s notice, CR mobilized a small but significant opposition to a jail construction proposal in San Mateo County.  Critical Resistance brought the expertise of residents hit hardest by poverty and imprisonment in one of the richest counties in California by supporting them to be spokespeople.  While the local governments in Los Angeles and San Mateo Counties slog forward on their construction plans, they are being tenaciously reminded that their rush to build will be met with resistance at every turn, and that ink on contracts and locations sited don’t make jail construction a done deal—not if fired up communities have anything to say about it. 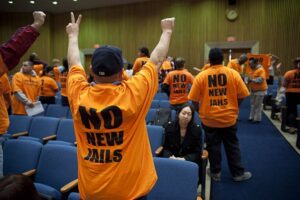 While these on-the-ground fights ramp up, we continue to put pressure on decision makers in Sacramento to fight prison and jail funding and legislation.  Our trips to Sacramento help us build with our allies and forge new partnerships.  These bonds are powerful when fighting a system designed to sever so many ties.   During trips to Sacramento in May, our members joined forces with others to cancel the construction of a maximum security prison in Adelanto California that would have caged 3,000 people, while also canceling a bill that would have flooded San Mateo with jail construction funds.In New Orleans, CR members continue to fight to maintain the substantial victory won through the Orleans Parish Prison Reform Coalition for a population cap on that facility.  Despite repeated efforts by the sheriff to expand the size of the jail, the coalition is standing strong and resisting any expansion.

One of our most significant victories on the prison front this year is cutting AB900 funds in half, as is reflected in California’s recently-released budget.  This not only means billions of dollars less for prison and jail construction but also that the tide has shifted in California—prison expansion is not a given and communities are more and more empowered to fight back.

Moving forward, we are eager to beat back the rest of AB900, to stop jail construction in LA and San Mateo Counties, and to continue building a vibrant anti-prison movement across California.