On May 29th 2019, Manhattan Community Board 1 unanimously voted to reject the City’s borough jail construction proposal – all four of the impacted community boards have now made an advisory recommendation to their Borough Presidents to refuse this new jails plan. In public testimony prior to the vote, many were united behind a common condemnation of New York’s absentee Mayor, who is traveling the country insisting he’s “ending the era of mass incarceration” in New York City despite his intention to cement jails into the landscape long into the future. Even with all the conversation about community boards simply not wanting jails near where they live, we know that the political tide has turned against jailing overall. Community board members may talk most explicitly about looking out for their neighborhoods but in rejecting borough proposals they are also refusing to accept a plan that touts jail construction as a “moral imperative” while directing billions in public funding toward caging and suffering.

We will continue to organize to defeat plans for new jails and to close Rikers now!

In the words of R., our friend and fellow organizer, who is from NYC and currently imprisoned upstate:

It appears that this is supposed to be a plan to close the violence plagued Rikers Island. By closing Rikers and constructing new jails, does that mean violence would not plague the new jails? Everyone is talking about new jails versus no new jails, but the reality is what is the Mayor and the City Council doing about people being jailed in the first place? Are we as a society going to continue forever to incarcerate human beings? When are we as a people in the whole going to get a grip?

Within the next thirty days each borough president will make their own advisory recommendation to the City Planning Commission, and they will each be hosting their own open hearing. Check out this No New Jails NYC tool to follow the land use process. Join us in demanding no new jails anywhere and leverage some political pressure on borough presidents, two of which are prospective 2021 mayoral candidates and another who is running to be Queens District Attorney. While the process has been disjointed thus far and each proposed site may seem geographically independent, this jail construction proposal is four jail construction plans ruthlessly lumped into a single expedited approval process that culminates with a single City Council vote.

Please stay in touch, as the City is rushing through the ULURP process and below details may be subject to change 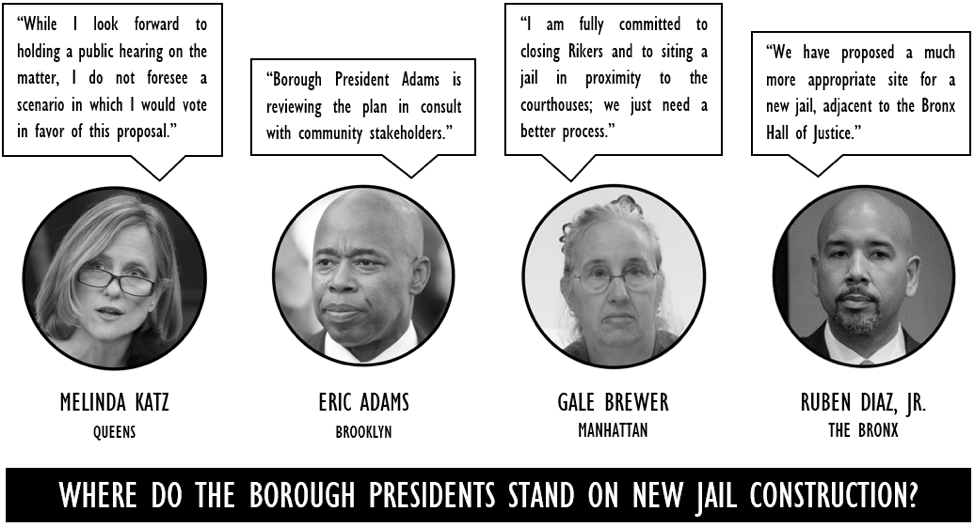