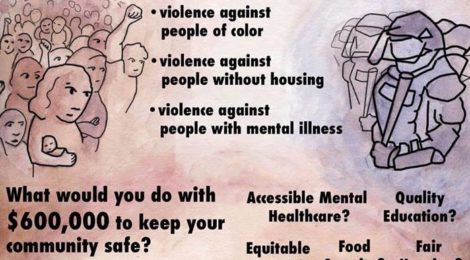 On Tuesday, November 21st, during an invite-only meeting at Portland City Hall that included Portland Mayor Ted Wheeler, Portland Police Chief Danielle Outlaw, and Multnomah County DA Rod Underhill, plans were announced to increase police patrols and to post signs warning against camping or sitting in specific areas of downtown Portland. This meeting was held solely to update and hear concerns from the business community, with no notice for the general public.

We, as Critical Resistance Portland (CRPDX), and members of the Mental Health Care Not Policing (MHCNP) coalition, reject this planned increase in police patrols and oppose policies that further marginalize and criminalize those experiencing houselessness and poverty. The announcement of this plan is a clear example of city officials pandering to corporate interests at the expense of people in our community who are primary targets for the violence of policing.

These close ties between city officials, police, and corporations and businesses are extremely troubling. According to an Oregonian article from November 22nd, these plans for increased patrols were developed “to address business owners’ concerns about public safety due to homeless people in the area.” Last month, in a November 10th Guest Opinion for the Oregonian, Ted Boyle, CEO of Columbia Sportswear, stated that moving one of their brand headquarters out of downtown Portland is under consideration, due to perceived threats to employee safety, and voiced his support of Mayor Ted Wheeler’s proposal to the Portland City Council to add 80 police officers to the PPB as a solution. The Mental Health Care Not Policing coalition members and Critical Resistance Portland members attended the November 8th City Council meeting, where we witnessed representatives of the Gateway Area Business Association expressing similar views: requesting increased police patrols to protect their businesses, while advocating for the criminalization and removal of houseless folks and people in the neighborhood that business owners perceive to be “hurting” their bottom line. And on November 28th, 20 business owners in the Pearl District met with Berk Nelson, a senior advisor to Mayor Ted Wheeler, in order to demand the same. This seems to be a highly coordinated effort by corporations and businesses in Portland to divert public money, resources, and city officials’ attention towards safeguarding their own private interests.

This use of public funds and resources to protect profits and corporate growth is detrimental to folks who are Black, brown, queer, trans, houseless, neurodivergent, and who do not serve the interests of capitalists. We know that policing does not equal safety. We know that policing means trauma, racism, violence, displacement, and even death for many members of our communities. We advocate for divestment from the PPB and demand investment in community-based and derived resources, services, education, housing, transit, and health care. Policing must be made obsolete. Real safety comes from building stronger communities.

Interested in getting involved? Our growing community coalition is focused on ending the role of police as first-responders to mental health crises and building up community-derived and oriented alternatives that provide real, meaningful care and safety. Please join us for our next Mental Health Care Not Policing coalition meeting on Sunday, December 10th at 10AM. Visit the Facebook event page for more information and to register.

← Shut Down Rikers Island, and Don’t Replace It
Building a Movement for Abolition: Thank you for giving to CR! →