Browse: Home   /   Critical Resistance in 2014: Check out our Annual Report 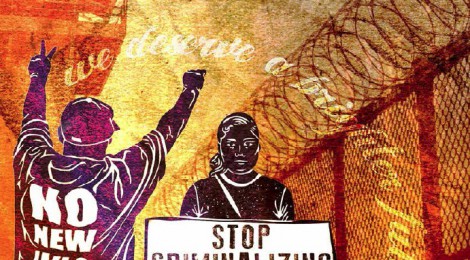 Critical Resistance in 2014: Check out our Annual Report

Click here or on the image to read our 2014 Annual Report.

Critical Resistance is proud of what we have built as an organization and a movement, and this year again confirmed our role in the struggle to abolish the prison industrial complex: to lay bare the PIC’s death-dealing violence and to boldly envision a world free of the prison industrial complex. We know our fight is far from over, but we are enthusiastic to share with you our accomplishments in the last year.

The fight against the prison industrial complex (PIC) takes many forms. Critical Resistance understands that even as we work for PIC abolition we must simultaneously build community self-determination. We fight for abolition by halting prison and jail construction projects; depriving law enforcement of its tools of repression; and starving the system of resources it uses to maintain itself. We build self-determination by directing those resources to healthy alternatives and programs that empower communities and don’t rely on prisons and police; supporting prisoner-led organizing; facilitating political education; and taking concrete steps toward building a world free of the prison industrial complex.

We are in a moment where the questions Critical Resistance (CR) has been raising for the last 15 years have come to a head. 2014 saw the prison industrial complex struck by widespread growing outrage against the violence of policing.  The enormous wave of protests, mobilizations, and organizing sparked by the uprisings in Ferguson have put the police’s structural oppressive role into the national spotlight. However, this increased attention and movement reminds us not only that we have an opportunity to engage more people than ever in this fight, but that what we fight for now will have lasting impacts on our perceptions and experiences of public safety for decades to come.

We believe, as abolitionists, that policing and imprisonment do not make us safe. We know ending the violence of policing is not going to be achieved by adjusting the attitudes of people in uniform who carry guns. We also know that liberation is not going to come when we reassert ourselves as individuals who matter. Liberation always comes through collective struggle that demands shifts in power and self-determination.  We are enthusiastic to continue sustaining the growing momentum of anti-policing organizing in the U.S. and connecting it to the fight against prisons, jails, and political repression.

Thank you for standing with us,

All the members of Critical Resistance

Special thanks to Design Action Collective for designing this report.  Cover art contains images from the SF Print Collective’s NO NEW JAILS prints.

← Do Black Lives Matter? Robin DG Kelley and Fred Moten in Conversation
Issue 24 of The Abolitionist is Here →