The LA County Sheriff is attempting to move forward with a plan to build a new women’s jail in Lancaster as part of a long term $2.3 billion jail plan. The Board of Supervisors still have an opportunity to stop this racist and destructive jail plan but they need to act before it’s too late.

LA County currently cages around 17,000 people on any given day, with the lives of each of these individuals’ and their loved ones disrupted by the harms of imprisonment. As such, many grassroots activists in Los Angeles have been opposing jail building for more than a decade and are resolute in continuing to ensure County and State funding slated for jails is instead invested in real solutions such as housing, healthcare, education, and substance use and mental health services. Having clearly had enough of the inaction by the Board of Supervisors, community activists took action today to bring this issue to the forefront of LA County’s attention by dropping at least 5 banners from freeway locations around LA during Friday rush hour traffic. Banners were seen in Inglewood, Gardena, Boyle Heights, and even in Downtown LA by Men’s Central Jail! 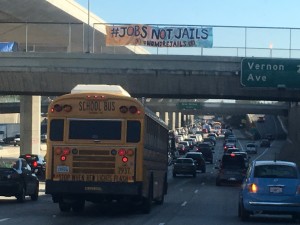 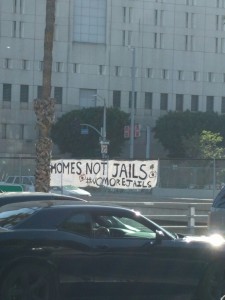 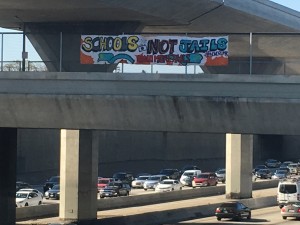 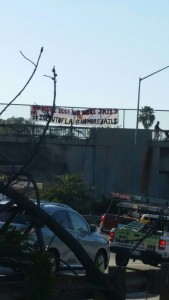 Critical Resistance LA and the LA No More Jails Coalition believe that locking people up in cages does not make anyone safer, and only serves to tear communities apart. We are working to stop the proposed jail in Lancaster and are demanding investment in resources that actually create strong communities.

Help spread the word and let policy makers know that LA stands for communities not cages.

Sample tweet: We demand #nomorejails! @CountyofLA could give each public school in LA $1mil if you stop the $2.3bil jail plan.