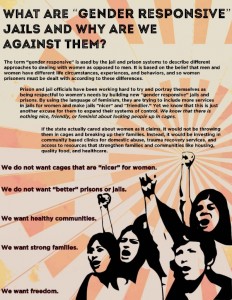 Our Los Angeles and Oakland chapters have been involved in ongoing campaigns to stop jail construction projects in their regions. In LA, we have been working in the LA No More Jails Coalition to halt a plan that would construct two new jails, one for women and one for people who have mental health issues. Similarly in San Francisco, we have galvanized popular opposition through the No New SF Jail Coalition against a jail project that the Sheriff is selling as “good for trans women” and “good for mental illness.”

As a response, CR has been working with allies both locally and statewide to develop a comprehensive strategy against any new jails. Last week, Californians United for a Responsible Budget (CURB) announced the release of its annual Decarceration Report Card during a press teleconference, which details if and how California counties are reducing their jail populations. CURB’s member organizations, including CR, helped compile the report and read statements to the press. During the press conference, Mauricio Najarro of CR-Oakland gave a powerful account against imprisonment:

“Californians are joining communities across the country in condemning the prioritization of policing and imprisonment as solutions to the problems faced by communities. Real solutions lie in alternatives that don’t tear families apart…If San Francisco truly cared for the most marginalized, it would be investing in programs that enable people to remain in their communities as they negotiate for themselves better ways to live and thrive – not throwing them in cages.”