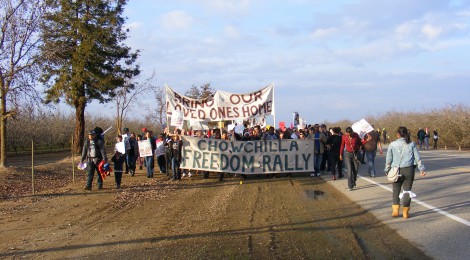 Critical Resistance Los Angeles and Oakland chapters joined together with our allies in CURB for a powerful day in Chowchilla to amplify the voices of the women inside Central California Women’s Facility (CCWF).

The California Department of Corrections and Rehabilitation (CDCR) is converting Valley State Prison for Women (VSPW) into a men’s prison in response to a U.S. Supreme Court order to reduce overcrowding. Instead of releasing people and closing VSPW, they are squeezing over 1,000 women and transgender people into the two remaining women’s prisons. The population of the other women’s prison in Chowchilla, Central California Women’s Facility (CCWF) is dangerously close to 4,000 even though its maximum capacity is 2,000. The conversion has aggravated overcrowding, created dangerous conditions, and health care is already getting much worse. What’s more, they have added yet another men’s prison to their inhumane system.

BRING OUR LOVED ONES HOME!