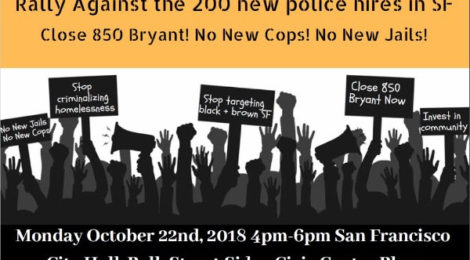 The No New SF Jail Coalition continues to steadily fight jail construction while also pressing for a closure of the jail at 850 Bryant. Despite the Board of Supervisors commitment to close 850 Bryant without building a new jail, we have seen no progress to that effect. In fact, jail population numbers continue to rise, particularly with an increase in police attacks on houseless people. Mayor Breed’s approval of 200 new police hires endangers community safety as gentrification and imprisonment in San Francisco are on the rise.

October 24th: Testify at the Board of Supervisors

The rally on Oct 22nd is building momentum for a Board of Supervisors Public Safety Committee hearing on October 24th at 10am. The hearing is to discuss progress on the recommendations made last year by the Board of Supervisor’s empowered Workgroup to Re-envision the Jail Replacement Project. While this workgroup proposed dozens of policy and programmatic solutions as well as investments to reduce jail population there has been little accountability or funding for implementation.

Turn out to the Board of Supervisors to support coalition demands:

Talking points and additional information about the coalition demands will be available at the hearing.

← Sneak Peak Into Issue #30 of The Abolitionist!
Our 20th Anniversary Was a Success! Photos and Program info →