Browse: Home   /   No Justification for the Violence of Policing: CRPDX on the Murder of Quanice Hayes 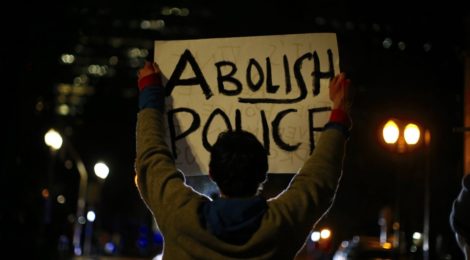 No Justification for the Violence of Policing: CRPDX on the Murder of Quanice Hayes

admin / March 8, 2017 / Comments Off on No Justification for the Violence of Policing: CRPDX on the Murder of Quanice Hayes / Uncategorized

Much of what has been reported on surrounding the murder of Quanice Hayes, a 17-year-old Black youth living in Portland, has focused on whether or not this killing by Portland police can be justified. No matter how much we investigate the circumstances, the conclusion will remain the same. Police murders and the daily abuse of policing are not justifiable under any circumstances.

It speaks volumes to the state of policing when the media believes that its audience will feel comforted by reports that a police murder did not include a victim being shot in the back. The focus on this finding serves to lead readers to a contrived conclusion that Quanice’s murder could have been deserved (he had a replica gun, he matched the description of a suspected thief, he ran from the cops). The media tries to convince readers that Portland police did what they had to- that Quanice’s death is “concerning”- but that his murder might in the end be the collateral our society pays for safety. These reports cover the underlying issue: the violence inherent to policing.

The police killing of working class and people of color, particularly in Black communities, is tragically a routine occurrence in the U.S., and is increasingly being seen as such. When compounded with the lower profile, yet even more routine daily oppressive practices that policing imposes on communities – stops, searches, house raids, arrests – we should understand the fundamentally violent role that policing plays. It is not a failed system, nor one whose harms are limited to “concerning” police shootings, but one that is carrying out its goal of social control as designed.

The devastating impact of policing, specifically its impact on communities of color in Portland is palpable not only with killings but routine harassment and dehumanization, setting the stage that attempts to justify police murders. Quanice’s family is now forced to defend his character in the public eye while we are given the power to judge whether or not Quanice deserved to be murdered by Portland police. Yet we know that in virtually every case where a Black person is shot and killed by police – whether they were armed or not, running away or standing their ground, had their hands in their pockets or up in the air – the police claim justification and the media accepts their claims as legitimate, laying the ground for a back and forth debate. This back-and-forth is delegitimized entirely when we understand that police are intended, funded, and equipped to violently control communities. Police murder is police murder. The killing of Quanice Hayes by Portland police doesn’t require our communities to decide whether or not Quanice deserved to die – but rather underlines the continued oppression of police through the Prison Industrial Complex (PIC).

Portland Mayor Ted Wheeler remarked on the murder of Quanice by Portland police on Friday, February 10, 2017, “I’m not assigning blame. I’m not assigning judgment today. … What I am doing is this: I’m affirming that the events that happened here in Portland are happening all too often.” Police will continue to kill and oppress communities of color, queer people, youth, people with disabilities, people experiencing mental health crises, and immigrant communities because that is their function, that is why the police exist.

If Mayor Wheeler and other city leaders acknowledge that this is “happening all too often,” they have the responsibility to take action to diminish the capabilities of police to harass, repress, and kill our community members through reducing their staff, budget, power, and resources. Otherwise, community power, organizing, and resistance will compel them to take such steps.

Join Critical Resistance Portland as we seek to dismantle the PIC, work to end the policing of our communities, and focus on building alternatives and community resources.