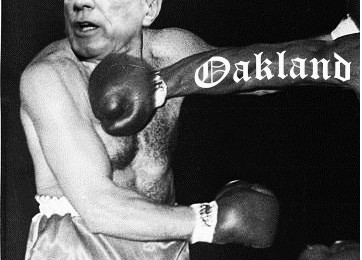 Critical Resistance Oakland is a member of Stop the Injunctions Coalition, one of the many groups who has been mobilizing against the Oakland hire of “Supercop” William Bratton.

Dear Friends, Allies, and Members of Stop the Injunctions Coalition,

This January, Stop the Injunctions Coalition and hundreds more Oakland residents strongly voiced opposition to a proposed $250,000 contract with controversial police consultant William Bratton. Bratton’s name has become synonymous with contentious zero tolerance police policies such as gang injunctions, stop and frisk, curfews, and quality of life policing; all policies that our communities have rejected time and time again.

As you have probably heard, on Tuesday, January 22, the Oakland City Council voted 7-1 to approve an amended contract with Strategic Policy Partnerships which includes the consulting services of the infamous Bratton.  Thanks to everyone that came out to the meetings; that called and emailed Councilpeople; to the people and organizations in Los Angeles and New York that signed on to the letter voicing opposition to the contract.  It’s been so amazing to see the spirit of solidarity in this struggle.

While the vote came as no surprise it also came in the midst of overwhelming community opposition.  So while we lost the vote, we also want to reflect on what we won.

Our communities bear the greatest burdens of racism, economic inequality, and police violence.  We are also the ones that put up the strongest, most thoughtful, creative and inspiring fights.  William Bratton is no joke and wields huge amounts of prestige and influence.  In the US and internationally he is backed by people and institutions that are able to leverage incredible amounts of resources.  It is very significant that together we were able to muster such strong resistance to Bratton coming to Oakland.  Together, we put the City Council and the OPD on the defensive and forced them to back-peddle and distance themselves from zero-tolerance policing. We made this a broad public issue rooted in demands for community-led public safety initiatives and programs.  The past two weeks speak volumes about the possibilities for building real and sustained people power in Oakland.  There is obviously much more work to be done.  However, the gains we’ve made put us in better fighting form to continue to chip away at the reach and scope of police violence in our city and to build up our capacity to build stronger and healthier neighborhoods and communities.