Over the last year, Care Not Cops has organized Portlanders to reject increases in policing budget and staffing. We built a strong campaign to grow public awareness about how increased policing is not a valid response to mental health crisis, but rather police based responses endanger community members’ safety and eliminate their agency.

Through mobilizations to budget forums and community events we engaged hundreds of Portland residents and workers who stand behind our campaign demands. Care Not Cops and our community partners consistently rejected any increase in the Portland Police Bureau budget, opposed the creation of new positions, and demanded a freeze on new hires.

Despite widespread community opposition, on Wednesday, May 16th, Portland City Council approved the proposed budget that included a $6 million expansion of the Portland Police Bureau and the creation of 55 new sworn officer positions. This puts the police budget for the upcoming fiscal year at $225 million. 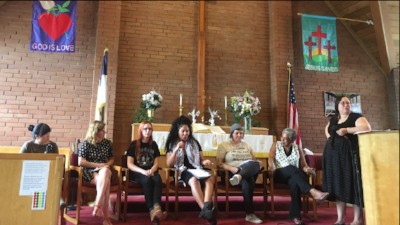 Watch a short video of Anna from CR Portland on the May 5th Envisioning Community Safety panel.

Our work has grown steadily over the last few months as seen by the increase in media attention as well as community turnout.

At each event it was incredibly powerful to see so many in attendance united in the position that policing does not make us safe and investing in life sustaining resources for our communities must be the city’s priority. This pressure meant that when the Mayor – who also serves as Police Commissioner – released his proposed budget at the end of April, the increase to last year’s budget was for $6 million less and contained 38 fewer positions than the original budget proposed by the Portland Police Bureau. This reduction is a testament to the strong organizing that the community has engaged in.

In the face of this organizing, Portland City Councilmembers and Mayor Wheeler consistently belittled community understanding of budget processes. This was a tactic to undermine the demands of Portland residents, particularly Black, Brown, immigrant, poor, and houseless people, as well as those who are neurodiverse or have disabilities, who experience extreme police harassment and violence.

Further, by publicly reiterating our supposed misunderstanding of the budget, City officials showed their blatant disregard for the safety of the communities they claim to serve. We will not be swayed or divided by this tactic. We will continue to put pressure on those who make policy decisions for our community. Our voices will be heard!

At the same time, through the budget process, Mayor Wheeler and City Council pressed forward on other initiatives that exposed their backward priorities for Portland, including their refusal to fund YouthPass which would provide transportation to 3,900 youth in East Portland school districts for the 2018-19 school year. In so doing, they demonstrated that their allegiances are with the Portland Business Alliance, gentrification, and the white supremacist institution of policing.

We are heartened to see so much community unity and pushback against increased police violence. We are inspired by connecting with other organizations and community members to envision ways we can invest the resources that are currently being put towards policing into alternatives that would help create secure communities where people can truly thrive.

We feel encouraged and empowered to continue to build a movement to defund, disarm, and ultimately disband the police.

Critical Resistance Portland will be hosting our monthly Prisoner Correspondence and Volunteer Night on Monday, May 21st from 5:30-8:30 PM. Please join us to write letters to imprisoned people and learn more about how to get involved with Critical Resistance and our Care Not Cops campaign. Care Not Cops will be working to develop community-led learning spaces to build shared knowledge and resources to make policing obsolete. Sign up on our website to receive updates.