Critical Resistance is proud to be one of over 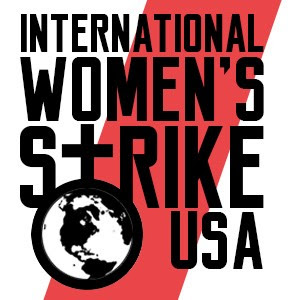 100 organizations endorsing the internationalist and anti-imperialist platform authored for International Women’s Strike for a global day of action today, March 8th. The platform, below, echoes the many platforms that CR has amplified and authored over the years as we work towards an end to the interlocking components of the prison industrial complex. This platform names these harms directly: the violence of policing, immigration raids, state policies that worsen and consolidate poverty, and the devastating impact of state violence on Black and Brown communities. Abolition of the prison industrial complex is an essential strategy for women, queer, and trans liberation, Black liberation, and Third World self-determination.

In addition to standing with the other organizational endorsers who “come from many political traditions but are united around the following common principles,” we also want to lift up the life and dignity of all women and gender non-conforming people who, from inside jails, prisons, and detention centers, have been leading struggles for freedom and ending state violence. We cannot forget the bold and creative organizing that people behind bars push forward, despite being under the harshest conditions of confinement and state repression. Nor can we forget the survival and resistance of transgender and cisgender women outside of imprisonment who endure economic and social hardships while simultaneously fighting for their loved ones.As CR Los Angeles member Shabina Toorawa points out, “as women of color, as mothers, and as primary care givers, we support reproductive justice and trans power, and we know what true gender empowerment is. It certainly isn’t imprisonment, lock-up, and jail expansion.”

As Critical Resistance continues to fight against

the proposed women’s jail expansion in Los Angeles, defend the victory against new jails in San Francisco, and fight the proposed cuts to visiting hours for maximum security prisons in New York that would cause additional hardship on women, loved ones, and children, we uplift this platform as a radical and internationalist guide to inspire our struggle not just on March 8, but every day that we fight for freedom.

An End to Gender Violence

All women deserve a life free of violence, both domestic and institutional.  Working women, trans women, and women of color face the worst aspects of direct institutionalized violence, be it in the form of police brutality, immigration raids, or day-to-day violence in the form of state policies that create and consolidate poverty in our communities.  Against all such state and personal violence, we demand that our lives and labor be treated with dignity for they form the basis of this society.

Reproductive Justice for All

We stand for full reproductive justice for all women, cis and trans.  We want complete autonomy over our bodies and full reproductive freedom.  We demand free abortion without conditions and affordable healthcare for all, irrespective of income, race or citizenship status. The history of sterilization of women of color in this country goes hand in hand with the attack on abortion rights.  Reproductive justice for us means the freedom to choose both whether to have children and when to have them.

Labor rights are women’s rights because women’s paid labor in the workplace and unpaid labor at home is the basis of wealth in our society. All over the world millions of women are forced to work for slave wages in dangerous sweatshops and other ‘hell factories’ that kill thousands every year. In the United States 46% of union members are women and a majority of them are women of color. All women, irrespective of citizenship status, sexuality or race, must have equal pay for equal work, $15 minimum wage, including for caregivers, free universal child care, paid maternity leave, sick leave, paid family leave and the freedom to organize a fighting union in the workplace. As working women who hold up half the sky we refuse to be divided over the kind of labor we perform, whether skilled or unskilled, formal or informal, sex work and domestic work.

Decades of neoliberal policies have seen the violent dismantling of social provisioning that has affected all women.  While our working lives have been made increasingly precarious, social services that might have provided a safety net against such harsh exploitation of labor, have either been attacked or removed completely.  Against these attacks, we demand an expansive restructuring of the American welfare system to serve the needs of the majority, such as universal healthcare, robust unemployment and social security benefits, and free education for all. We demand that the welfare system work to support our lives rather than shame us when we access such rights.

For an Antiracist and Anti-imperialist Feminism

Against the open white supremacists in the current government and the far right and anti-Semites they have given confidence to, we stand for an uncompromising anti-racist and anti-colonial feminism. This means that movements such as Black Lives Matter, the struggle against police brutality and mass incarceration, the demand for open borders and for immigrant rights and for the decolonization of Palestine are for us the beating heart of this new feminist movement.  We want to dismantle all walls, from prison walls to border walls, from Mexico to Palestine.

Environmental Justice for All

We believe that both social inequality and environmental degradation are due to an economic system that puts profit before people. We demand instead that the earth’s natural resources be preserved and sustained to enrich our lives and those of our children. The struggle of Water Protectors against the Dakota Access Pipe Line inspires us. The emancipation of women and the emancipation of the planet must go hand in hand.