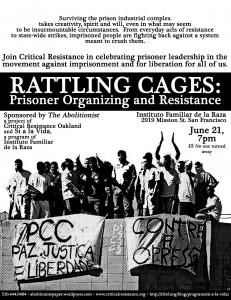 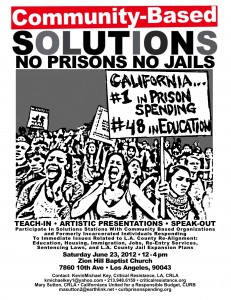 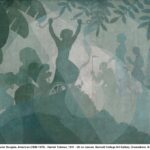 Tuesday, June 19, marked Juneteenth, the commemoration of the end of formalized slavery in the United States.  The date coincides with the last wave of notification of the signing of the Emancipation Proclamation, reaching enslaved people in Texas more than two years after the document was initially signed, and its prominence across the US is often connected to the 1968 Poor People’s March on Washington, DC.  Recognizing Juneteenth provides us with an opportunity to reflect on Black people’s history in the United States, on forced labor and confinement, and on the deliberate disorganization, dispersal, and death of African peoples through the slave trade.  It also seems impossible to consider Juneteenth without reflecting on the rise of the prison industrial complex, as well as Black peoples’ undying resistance to oppression and fights for liberation.Read more.

HOT OFF THE PRESSES!

Thank you for again supporting The Abolitionist! In this issue we hope to continue the momentum we have built since the release  of Issue 16, which focused on Life after the Prison Industrial Complex (PIC). We now look at some of the work that is happening to get us to that goal. It is crucial that, in addition to envisioning what our world could look like after the PIC, we familiarize ourselves with the work happening now to make it so. Challenging the social norms and barriers that exist between our loved ones and their communities, finding new ways to keep one another healthy and safe, and building up the world we want instead are all things that we will explore in this issue.  CLICK HERE TO GET THE PAPER.

And don’t forget, every penny you give toward the Abolitionist is another penny we can use to get the paper through the walls and to our people living and struggling in prisons, jails, and detention centers all over the country.  CLICK HERE TO SUPPORT THE PAPER.

TAKE ACTION AGAINST CURFEWS IN OAKLAND!

Please join Critical Resistance and Oakland’s Stop the Injunctions Coalition and sign this letter to City Council, urging them to immediately seek new activities and opportunities for youth this summer, not curfews.  We know that criminalizing youth will never make our neighborhoods or our youth safer.  We know that justifying police surveillance of teens and young people never leads to increased opportunities. CLICK HERE FOR MORE…