November 21, 2014
Dear Friends,
In anticipation of a verdict from the grand jury investigating the murder of Michael Brown by cop Darren Wilson, Missouri’s governor declared a state of emergency in Ferguson this past Monday. Even if we fooled ourselves into believing that Jay Nixon made this declaration to “protect civil rights and ensure public safety,” a ‘state of emergency’ makes little sense as a preventative measure. What seems clear is that the state is acting preemptively to crush any sign of resistance because it is terrified. And the more terrified it is, the harsher and more brutal are its attempts at repression.
Yet there is something appropriate about declaring a state of emergency before the verdict has been made, before any massive mobilizations have taken place. For indigenous communities and people of color, particularly Black and Brown communities, police violence, criminalization, and imprisonment are the norm. Those historically and structurally targeted by state violence are forced to live in a constant state of emergency, regardless of whether one is officially imposed by the state.
What is made apparent in this declaration is that the state knows it is incapable of delivering justice through its courts. A state of emergency is in place, regardless of what the grand jury decides (but we know that cops are rarely convicted); any verdict, guilty or not guilty, will never challenge the state’s continual murder of Black and Brown people. 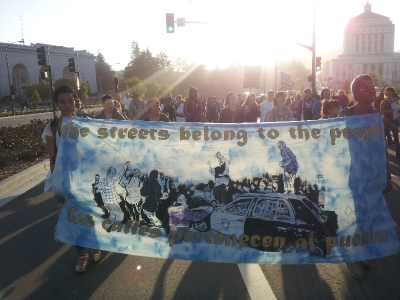 In Oakland, as in many cities planning to react to the verdict, police are standing by to respond with force to solidarity demonstrations. Mayor Quan has warned business owners to reinforce doors with steel plates, while advising residents to avoid downtown. Her missive sets up a de-facto state of emergency, and one reads desperation in her attempt to convince us of how much OPD has “significantly improved,” as if we should be relieved that the armed wing of the state is improving on a rubric appropriate for an elementary school progress report.The people should and will respond to the verdict in cities everywhere, whatever it may be. We don’t need the police to facilitate our anger – they are the very reason for that anger. And we don’t need the courts to pretend to be neutral arbiters of justice. Guilty or not guilty will not bring Michael Brown back, and will not prevent the next shooting of a Black or Brown person by police. This war-making by the state can only be confronted by collective resistance driven by our commitment to self-determination.