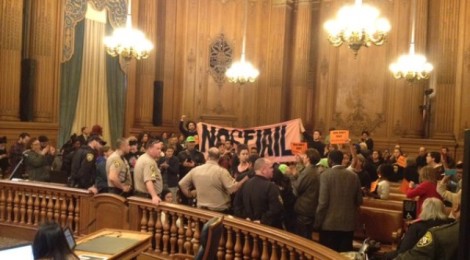 SAN FRANCISCO – Yesterday Sheriff Vicki Hennessy wrote to the Board of State and Community Corrections to rescind San Francisco’s application for jail funding under SB 863, writing “the San Francisco Board of Supervisors has tasked the Sheriff’s Department, the Department of Public Health, and community mental health and criminal justice stakeholders to convene an effort to explore alternatives that currently preclude building a new detention facility. To seek an extension at this time is not consistent with my intention to participate fully and in good faith in this local process.”

The letter from the Sheriff comes after years of No New SF Jail Coalition community mobilizations against the jail project as well as two hearings on alternatives to jail construction hosted by supportive members of the Board of Supervisors. Even the Sheriff agreed in her letter that “through this process, it has become clear that many in the San Francisco community are not supportive of using this money to replace any jail beds.” The letter makes jail construction under SB 863 funding an impossibility, however inevitably opens up the door for Ventura County to receive the funding.

While the idea that this funding would go to another county is very troubling, community members are optimistic about SF rejecting the funding. Mauricio Najarro, a member of Critical Resistance who has been active in opposing the jail said “we consider it a testament to strong community organizing that the Sheriff would respect the will of the people and reject funding today. We firmly believe that if we can stop a jail in San Francisco we can use and share the lessons we’ve learned to stop jailing everywhere.” Community members are celebrating this as a hard fought victory: for now, there will be no new jail construction in San Francisco.

The Work Group to Re-envision the Jail Replacement Project referred to by Hennessy brings together community advocates and agencies providing mental health needs and reentry services in order to create a plan for closing 850 Bryant and putting resources into community alternatives to jail construction. Their goal is to provide a draft proposal by the end of the summer to be revised and shared with the Board of Supervisors and Mayor in November 2016.

The Work Group’s first meeting was on March 11th, 2016 where over a dozen members of the No New SF Jail Coalition attended and gave public comment. The No New SF Jail Coalition plans to attend future meetings to hold the Work Group accountable to addressing root problems in San Francisco and not building any sort of asylum or locked facility. This was reiterated by Woods Ervin, a member of the Work Group representing the Transgender Gender Variant and Intersex Justice Project, an SF-based organization that works with people in prison, who demanded, “We want community-based treatment or residential facilities; we do not want more cages in the form of mental health facilities that strip people of their rights and restrict their freedom of movement.”

← The Devil is in the Details of Decarceration: Work Group meets to discuss closing jail and building alternatives
New York Chapter at Work for Abolition →