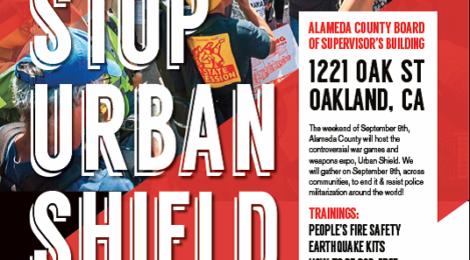 The weekend of September 8th, Alameda County will host the controversial SWAT training, war games and weapons expo, Urban Shield. We will gather on September 8th, across communities, to end it & resist police militarization around the world!

Join the Stop Urban Shield Coalition to say NO to policing, militarization and state violence!

With the current manifestations of violence under the Trump administration, it is more important than ever to urge the Alameda County Board of Supervisors to end this racist and Islamaphobic event and invest in emergency preparedness that benefits the health and wellbeing of our communities. While Urban Shield is just one front in the fight against the state’s attempt to militarize every aspect of our lives – from its war-making here and abroad, to the increasing presence of police in our schools, to the systemic murder of Black and Brown people at the hands of police – stopping Urban Shield would be a major victory against this growing trend of militarization in cities everywhere, from Oakland to Ferguson to Baltimore.

Stop Urban Shield is a broad coalition of grassroots community and social justice organizations united in the fight to end Urban Shield and hold accountable our cities and counties for their corroboration in increased racialized repression and violence.

Join us in resisting violence against our communities and in fighting for genuine visions of justice, safety, and self-determination.

← “Abolition in the Trump Era” This Weekend in NYC!
New Video Release! →