Our attention has been turned this week to Holman Prison in Alabama where rolling uprisings inside have led to prisoners taking control of certain areas of the prison. Prisoners have since released a set of demands including increased educational programs for prisoners, monetary damages for physical and mental abuse, and revoking the State’s 446 laws that – similar to Three Strikes laws – harden sentences for subsequent convictions. 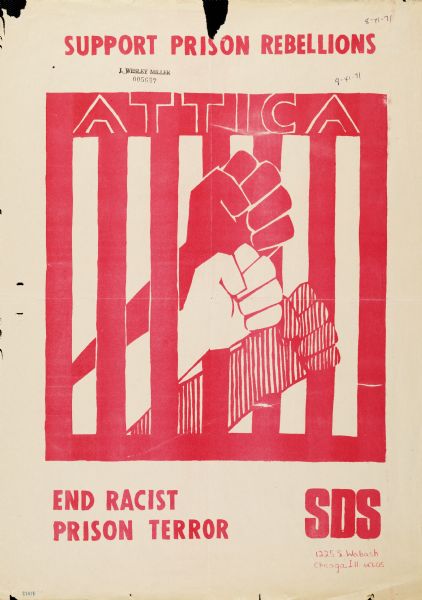 The prisoners, alongside many loved ones and supporters on the outside, are pointing to the harsh conditions at Holman Prison. While Holman is notably crowded, holds the only death row in Alabama, has a high number of prisoners in solitary confinement, and cages many prisoners dealing with medical, physical, and psychological abuses, Holman should not be isolated as an extreme example. It is in fact emblematic of the racism and violence inherent in the system of imprisonment.

Image: Poster created by the Students for a Democratic Society (SDS) in support of the 1971 Attica Prisoner Uprising.

This uprising is part of a long history of resistance to imprisonment from people inside, including the 1971 Attica Rebellion, and the 2011/2013 California and Guantanamo Bay prisoner hunger strikes. Just as PIC abolition follows in the tradition of the abolition of slavery, these acts of resistance are part of a history that includes Nat Turner’s Rebellion in 1831 and other resistance to slavery like work slowdowns, tool breaking, covert meetings, and escapes to free zones.

Abolitionists of the PIC do not believe that this system can be fixed through reform, but seek to rid society of it entirely. As one of the prisoners at Holman stated, “we’re tired of this…there’s only one way to deal with it: tear the prison down.”

We support the demands of the Holman prisoners and hold strong to our insistence that demands around poor prison conditions and crowding not be used as excuses to cage more people or build more new prisons for abolitionists to tear down later. Unfortunately, as the Holman uprising raged on we saw an Alabama Senate Committee preliminarily approve $800 million to construct four new prisons. We must organize against states, counties, and the federal government building more prisons and jails – that are temporarily less crowded before they are filled again – as a supposed solution to poor conditions. We must confront the inherently violent and oppressive condition of imprisonment and fight for alternatives to caging people altogether.