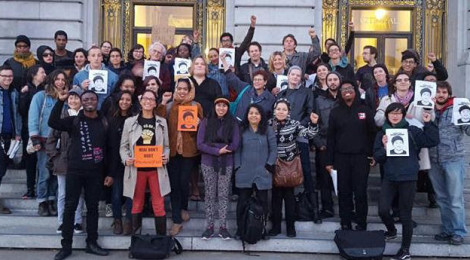 The San Francisco Jail Fight Continues, Stronger than Ever!

admin / January 6, 2016 / Comments Off on The San Francisco Jail Fight Continues, Stronger than Ever! / Uncategorized

After 2 years of organizing with the No New SF Jail Coalition, the Critical Resistance Oakland chapter and our partners have won a victory in San Francisco as the Board of Supervisors followed the leadership of the people and voted to stall over $300million of new jail construction. It was through strong consistent organizing and engagement of hundreds of community members that we were able to win this victory; our work continues as we fight to hold the City accountable on its commitments to invest in community based solutions that will build a stronger and safer San Francisco. Check out this video by CRC Media Corps capturing the No New SF Jail Coalition’s victory rally after the jail was voted down on December 15th, 2016.

In a climate of much political posturing against mass imprisonment nationally, San Francisco has put its money where its mouth is. Now we need other counties nationwide to follow this model. The No New SF Jail Coalition did not organize to reject this funding simply because we don’t want a jail in this city, we rejected it because we don’t believe caging people is a solution to social problems. It’s time for the state of California and the nation to follow San Francisco and boldly envision robust alternatives to jails and prisons.

The No New SF Jail Coalition’s work is now to ensure that this jail proposal does not get put back on the table in the Board of Supervisors’ Budget and Finance Committee, nor does the City try to build a mental health facility that becomes a jail by another name, caging and controlling people needing mental health support. Stay updated by checking out the No New SF Jail Coalition website and sign our online petition to join our mailing list.

← GET THE LATEST ISSUE OF THE ABOLITIONIST
Oppose the LA Jail Proposal: Bad for People, Bad for Environment →