Browse: Home   /   Trump’s Victory A Reflection of Oppression and War-Making in America 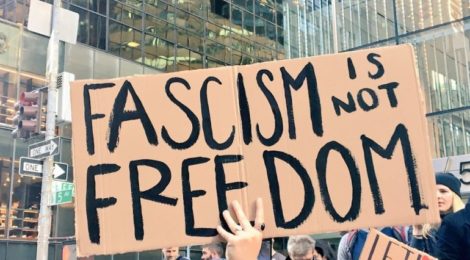 admin / November 21, 2016 / Comments Off on Trump’s Victory A Reflection of Oppression and War-Making in America / Uncategorized

Let’s not exceptionalize Trump. Let’s denormalize and fight the tools that will be used during his presidency, as during all others, to wage war on us.

By Mohamed Shehk and Lara Kiswani

Many are shocked. Some are scared. Others are preparing. Trump’s campaign was lifted by and has emboldened a rising right wing current. This will undoubtedly have damaging consequences for Black, Native, Latino, Arab, Muslim, and other communities of color, queer and trans people, and women. We are already witnessing increased incidents of hate violence, racist messages scrawled on personal and public property, and threats against marginalized people. These attacks are by no means new, but we can anticipate that they will become more frequent.

However, let’s be clear: the gloves have come off, yet the fists have always been iron. Trump’s victory is simply a reflection of the nature of oppression and war making in this country.

As vile as he is, the potential danger of being shocked at a Trump presidency is that the violent and oppressive practices, policies, and institutions built up and strengthened under past presidential administrations become understood as the normal that we long for. Beyond Trump’s victory, what may also be shocking is that much of what Trump has proposed has been very much the status quo.

Trump wants to deport millions of people, yet Obama has already done just that while overseeing the growth of the largest deportation regime in this country’s history. Trump has supported the use of torture, yet thousands of prisoners are caged away in solitary confinement, seen as a form of torture even by the U.N. Trump is virulently anti-Arab and Islamophobic, wanting to bomb “terrorists and their families,” yet Iraq was completely decimated under Bush, and Obama expanded the drone program which has resulted in the deaths of thousands in Yemen, Afghanistan, and Pakistan. We have continued our legacy of imprisoning more people than any other country, having police forces routinely murder Black and Native people in the highest proportions, and are currently home to the largest mass surveillance infrastructure that allows the state to keep tabs on quite literally everyone. Not to mention that the largest military aid package to the apartheid state of Israel was approved earlier this year.

So we ask: are we really surprised that a country structured on exploitation, sexism and white supremacy elected an outwardly racist, sexist billionaire? It’s not that we shouldn’t be appalled. Rather, it’s that we should be appalled at the war machine that Trump will be inheriting. And we should be prepared to fight.

What is to be done? In the face of more attacks on our communities, both by vigilantes and police, we need to build up community self-defense networks and practices. We need to strengthen existing alternatives to policing, and be creative in developing new ones. As protests continue, we need legal resources and defense funds, know your rights information to be widely shared, and safe and secure ways of communicating. We should all know what resources, organizations, projects, and initiatives have been doing this work, and think about how they can be supported and expanded.

Just as many are rightly demanding of the public that a Trump presidency not be normalized, it’s more crucial that we denormalize the daily practices and ideologies of state violence that has made Trump possible. For those of us who are committed to working toward dignity and self-determination, our work must be to denormalize and dismantle the structures of war, imprisonment, policing, and surveillance, rather than accept them as the status quo. We must continue organizing against imperialism, Zionism, deportations, and war making on people everywhere.

Let’s not exceptionalize Trump. Let’s denormalize and fight the tools that will be used during his presidency, as during all others, to wage war on us.

Lara Kiswani is the Executive Director of the Arab Resource and Organizing Center.

Mohamed Shehk is the Media and Communications Director of Critical Resistance.

← CR in Solidarity with Standing Rock
#GivingTuesday was a success! Thank you for Supporting The Abolitionist Newspaper →