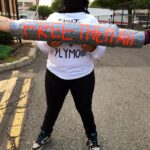 Since the 2020 presidential election in November 2020, people imprisoned have consistently waged ongoing hunger strikes and other tactics of resistance to protest indefinite confinement and the draconian measures used by local and federal officials such as 21-hour-a-day lockdowns. Imprisoned people used hunger strikes in order to draw attention to their conditions, escalate the stakes for themselves and the prison regime, and provide a quantifiable and visible form of resistance from the inside. Since the strikes, the Abolish ICE NY NJ coalition has been supporting resistance inside in different ways, by holding rallies outside of the jail and ICE field offices (in NYC, Buffalo, and Newark), along with organizing virtual forums with the strikers’ families and friends.

CRNYC and the Abolish ICE NY NJ Coalition have used participatory defense and direct action to support people imprisoned in ICE detention, demand release and resist transfers to ICE-contracted jails and prisons as well as deportations. 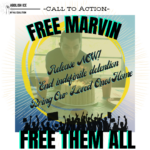 The #FreeMarvin Campaign is one participatory defense effort that the Abolish ICE NY NJ coalition has been working on. Marvin Ventura Reyes is a New Jersey resident originally from El Salvador who has been waging hunger strikes while locked up in detention, facing deportation. Learn more about his case on the CRNYC chapter page here, or on his social media support toolkit here.

CRNYC and the Abolish ICE NY NJ Coalition have supported a number of imprisoned people who are doing hunger strikes for their release to get their demands out, in addition to Marvin. Listen to the clips below of Arckange protesting conditions of ICE detention.

Arckange was transferred from Essex County Jail in New Jersey to New Orleans as retaliation against his hunger strike, but he continues to strike for his freedom, to be reunited with his family. Listen to him talk about why he needs those of us on the outside to take action. 2/3 pic.twitter.com/HiMMSelPCp