Alongside partners from LA No More Jails and Justice LA, Critical Resistance is working to halt to a multi-billion dollar jail plan being proposed for the county. This is a continuation of 10 years of successfully fighting jail expansion in LA County. Currently the Sheriff and Board of Supervisors are trying to push through an overwhelming plan to build 4000 new jail beds in LA County. These cages are specifically targeting people in the women’s jail system in LA County through a so-called “gender responsive” women’s jail in Lancaster, and people with mental health needs through rebuilding Men’s Central Jail in downtown LA into a mental health jail.

As former CRLA member Shabina Toorawa points out, “as women of color, as mothers, and as primary care givers, we support reproductive justice and trans power, and we know what true gender empowerment is. It certainly isn’t imprisonment, lock up, and jail expansion.” Check out this video of “5 Reasons Why LA County Doesn’t Need a Women’s Jail” to learn more. Likewise, CRLA and our partners understand that mental health care cannot be provided inside a jail cell.

LA County must work to immediately reduce its shamefully high jail population through instituting decriminalization measures, bail reform, non-punitive diversion, non-carceral alternatives to imprisonment, and life sustaining services in community. LA County must look proactively to the impact of bail reform as well as other pre-arraignment and pre-trial release on reductions in the size of the imprisoned population in L.A. County Jails. 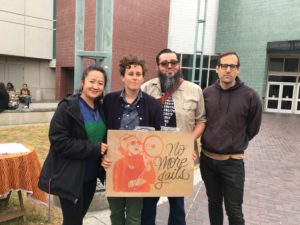 We are currently, in summer 2018, working both against construction on the women’s jail in Lancaster (“Mira Loma Jail”) and the replacement to Men’s Central Jail known as the Consolidated Correctional Treatment Facility (“Mental Health Jail”). As of this update, the County has broken ground on the Mira Loma Jail and those fighting jail expansion in LA County are feeling a sense of urgency to try to stop the construction from moving forward. From 2014-2016 we were able to win a couple of delays in this process and also drew much public attention to the issues of Valley Fever and toxicity of the jail, the fallacy of “gender responsive” jails, and the inhumanity of jail expansion. As a part of LA No More Jails, we were able to use the process of environmental certification of the plan to fight against jail construction, presenting a comprehensive analysis of the human and environmental justice impacts alongside hundreds of public comments from LA County.

Now, the County is pressing forward with their proposed Mental Health Jail, hoping to start construction as early as Spring 2019. We have also opposed the Environmental Impact Report of this jail proposal, organizing 32 organizations to sign on to our clear analysis as to why this jail must not be built. This summer, in June or July 2019 the Department of Public Works will seek certification of the EIR which will essentially propel the project proposal forward and lock in the potential for 3800 jail beds for people with mental health needs. We need you to show up in opposition. Prepare your organization and get involved!

County funds currently slated for expanded imprisonment must instead be allocated towards reducing policing and criminalization of communities, holistic health models and supporting formerly imprisoned people outside of the jail setting, empowering community organizations led by people most impacted by incarceration with the resources necessary to adequately support reentry, and creating innovative programs that provide life-affirming services.

The Reimagine 109 campaign organized by CURB members CRLA, ACLU, and Drug Policy Alliance, aims to divest funding that the County receives for reentry services out of the Sheriff’s Department and invest it into community based services that can prioritize support, treatment, and care. Check out the flyer here.

Get in touch with us to get involved in this important work! Email crla@criticalresistance.org

Check out these tools we’ve made: We are fighting hard and are building resources and to help resist this plan – check out our new Intro to the Jail Fight Zine and the Million Dollar Hoods maps (a UCLA project that we have contributed to) to see how much the Sheriffs are spending to lock up people in your neighborhood.