In 2016, Critical Resistance presented Profiles in Abolition, a national series intended to reinvigorate a critical understanding of prison industrial complex (PIC) abolition and inspire us to take creative and practical steps toward a liberated future – free of policing, imprisonment, or surveillance. We encourage you to check out the videos, photos and materials below.

As part of the Profiles in Abolition series, Critical Resistance is working on Breaking Down the Prison Industrial Complex, a new video project to keep shifting common sense towards PIC abolition. The first videos in the series will premier at the International Conference on Penal Abolition (ICOPA) this summer!

To learn more about this project and how to bring it to your community or school, click here.

This year we kicked off Profiles in Abolition  with events in Los Angeles, New York City, Oakland, and Atlanta. Profiles in Abolition has been a vibrant success, bringing together over 2,000 people in four cities to dream of a world where the political horizon is not dominated by cages and policing and igniting inspiring conversations about PIC abolition.

We gathered former prisoners, radical organizers, beloved educators, artists, musicians, and CR members to share the deep knowledge of grassroots leadership. Discussing CR campaigns and projects together with those of allied co-host organizations highlighted the connections between our radical vision and the practical steps people can take to advance abolition with us. 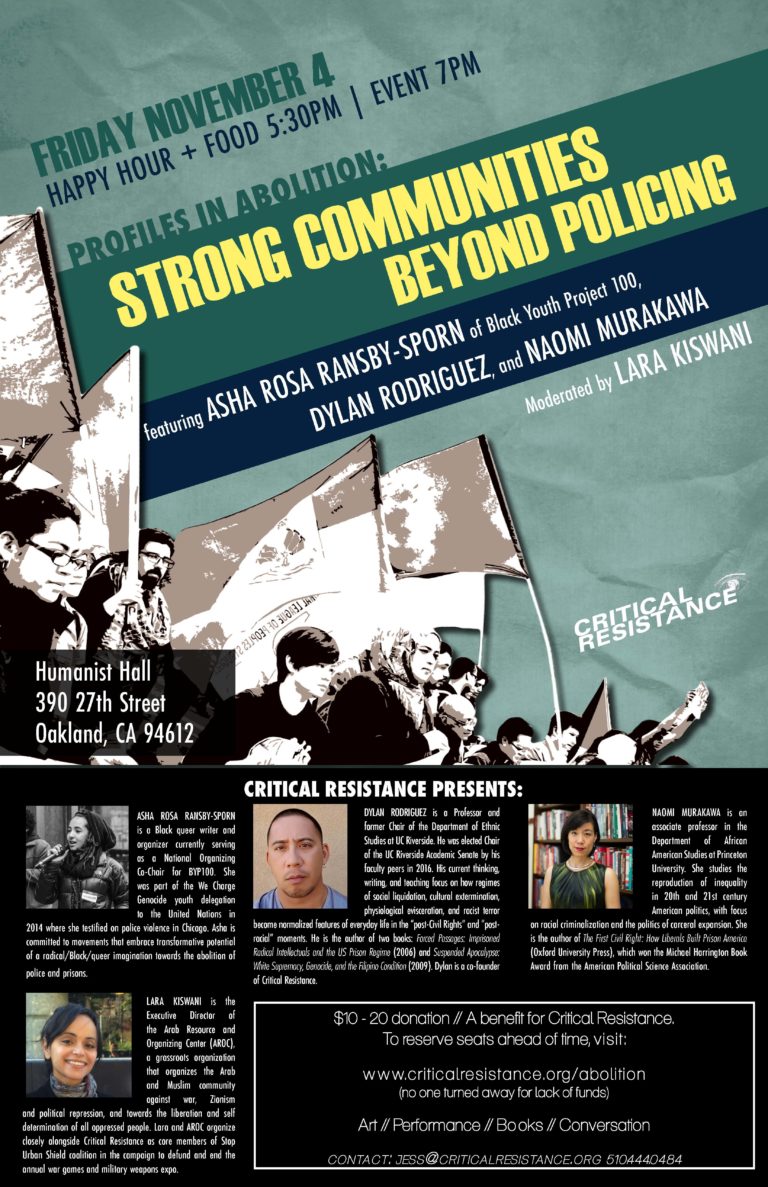 The Happy Hour includes free food, drinks for donation, and will feature drumming performance from Marshall Trammell and contributions from imprisoned Justice Now organizers that raise the spirit of liberation. Join us at 5:30!

Critical Resistance (CR) invites you to join us for Profiles in Abolition: Strong Communities Beyond Policing. This lively event will sharpen our vision to eliminate reliance on policing and increase our community power and wellbeing . We are excited to feature organizers and scholars from across the country who have been fighting the violence of policing with dedicated campaigns, writing, and Black, radical, queer and internationalist imaginations. Asha Ransby-Sporn of Black Youth Project 100, CR co-founder Dylan Rodriguez, and scholar Naomi Murakawa (author of The First Civil Right: How Liberals Built Prison America) will engage in lively conversation about lessons learned and strategies to uplift as we build for a world beyond policing. Lara Kiswani of Arab Resource and Organizing Center (AROC) will moderate.

About the Speakers and Performers 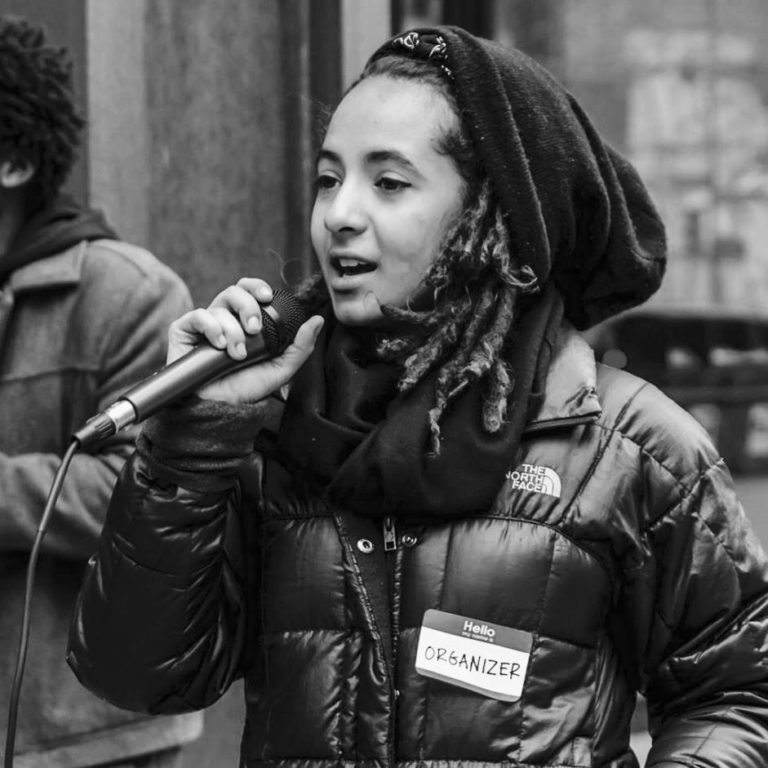 Asha Rosa Ransby-Sporn is a Black queer writer and organizer currently serving as a National Organizing Co-Chair for BYP100. She was part of the We Charge Genocide youth delegation to the United Nations in 2014 where she testified on police violence in Chicago. Asha is committed to movements that embrace the transformative potential of a radical/Black/queer imagination towards the abolition of police and prisons.

Dylan Rodriguez is a Professor and former Chair of the Department of Ethnic Studies at UC Riverside. He 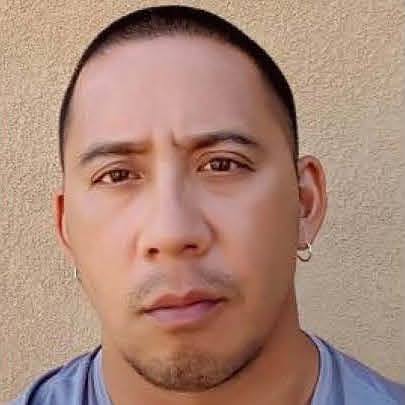 was elected Chair of the UC Riverside Academic Senate by his faculty peers in 2016. His current thinking, writing, and teaching focus on how regimes of social liquidation, cultural extermination, physiological evisceration, and racist terror become normalized features of everyday life in the

“post-Civil Rights” and “post-racial” moments. He is the author of two books: Forced Passages: Imprisoned Radical Intellectuals and the US Prison Regime (2006) and Suspended Apocalypse: White Supremacy, Genocide, and the Filipino Condition (2009). Dylan is a co-founder of Critical Resistance. 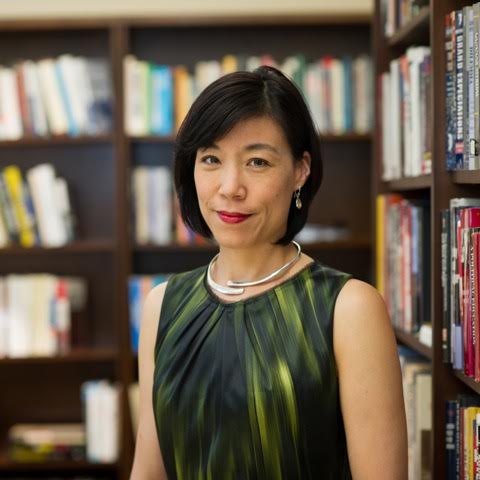 Naomi Murakawa is an associate professor in the Department of African American Studies at Princeton University. She studies the reproduction of inequality in 20th and 21st century American politics, with focus on racial criminalization and the politics of carceral expansion. She is the author of The First Civil Right: How Liberals Built Prison America (Oxford University Press), which won the Michael Harrington Book Award from the American Political Science Association. 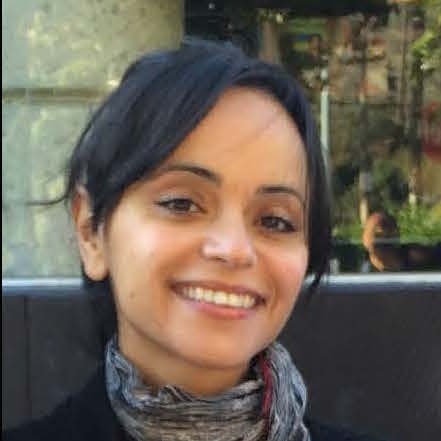 Moderator: Lara Kiswani is the Executive Director of the Arab Resource and Organizing Center (AROC), a grassroots organization that organizes the Arab and Muslim community against war, Zionism and political repression, and towards the liberation and self-determination of all oppressed people. Lara and AROC organize closely alongside Critical Resistance as core members of the Stop Urban Shield coalition in the campaign to defund and end the annual war games and military weapons expo.

*Asha and Naomi were sick and Rachel joined us for the event. 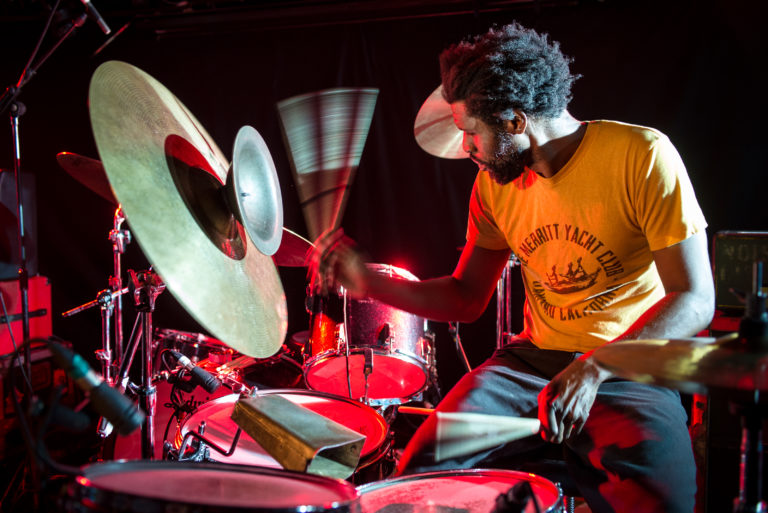 Currently on a European tour as the percussionist in the electro-acoustic duo Black Spirituals (Sige Records), Mr. Trammell performs internationally at the Jazz Haus in Copenhagen, The OCCII (Amsterdam), Islington Hall in London, Heritage Hall in Guelph, ON. Also, Issue Project Room (NYC), the Exploratorium Resonance Series (San Francisco) and will return to Europe this Fall. He has performed with Roscoe Mitchell, India Cooke, John Tchicai, Marco Eneidi, Dohee Lee, Dylan Carlson, Genny Lim, Jon Jang, Francis Wong and many more after 23 years in the San Francisco Bay Area. He is the new Music Instructor for Urban Promise Academy in the Fruitvale District of Oakland, CA.  http://mrtrammell.wix.com/researchstrategies 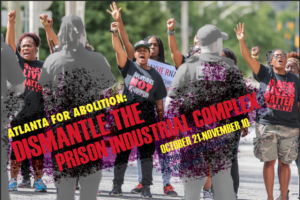 A 2-day program highlighting work to dismantle the violent systems of policing and imprisonment while fostering community based resilience. Featuring Degrees of Visibility, a photography installation and platform for abolitionist organizing, by Ashley Hunt. 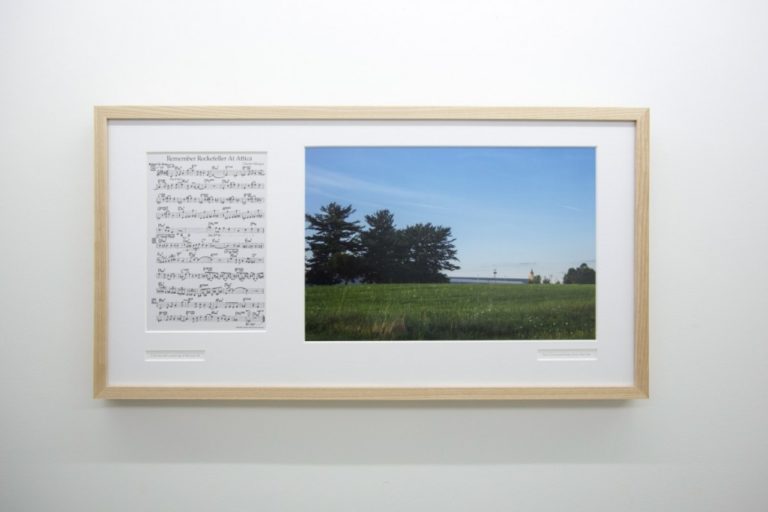 Degrees of Visibility, an installation of photograph and text-based works that document the visual politics of mass incarceration, will provide a backdrop for cultural events and workshops centering on dismantling police and prisons. The installation is configured as a platform for organizing against the prison industrial complex and imagining its abolition, conceived in collaboration with Critical Resistance and multiple Atlanta-based organizations.

The exhibit is part of Profiles In Abolition, a national series of events intended to reinvigorate a critical understanding of prison industrial complex abolition and inspire us to take creative and practical steps toward a liberated future – free of policing, imprisonment, or surveillance. Atlanta-based and Southern regional organizations, Project South,Racial Justice Action Center, and Southerners on New Ground bring forward this event alongside national organization Critical Resistance, in order to highlight their work to dismantle the violent systems of policing and imprisonment while fostering community based resilience.

We will be hosting multiple cultural and educational events to deepen understanding of the prison industrial complex and the movement for abolition. Additional organizational partners and events to be announced.

THE HARD ROAD TO ABOLITION// 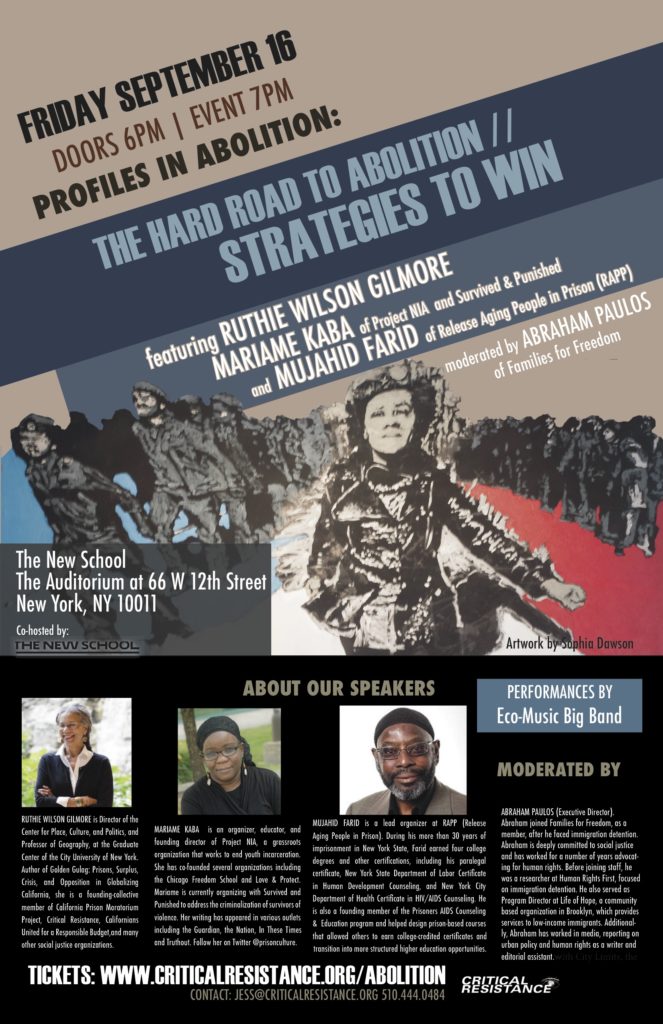 An event to benefit Critical Resistance

We’re at an exciting moment of astonishing energy and public discussion about the state of policing, imprisonment, sentencing, and surveillance. What can we can do now to erode the power of the prison industrial complex (PIC)? What reformist traps we must avoid in this period of astonishing energy and public discussion? The Hard Road to Abolition// Strategies to Win will encourage us to reinvigorate a critical understanding of prison industrial complex (PIC) abolition and to plan the way forward.

We are excited to host firebrand scholar activist Ruthie Wilson Gilmore, renowned organizer and educator Mariame Kaba of Project Nia and Survived & Punished, and freedom fighter Mujahid Farid of RAPP (Release Aging People in Prison) in a lively and inspiring conversation about visions and strategies to eliminate reliance on the PIC, increase our community power and wellbeing. Through this event and the conversation, we hope to forge stronger movement strategies across campaigns against prisons, jails, sentencing, and policing.

We look forward to bringing together a community audience of organizers and freedom fighters who have worked so hard to bring us to this opportune political moment. We hope you can join us!

Ruthie Wilson Gilmore is Director of the Center for Place, Culture, and Politics, and Professor of Geography, at the Graduate Center of the City University of New York. Author of Golden Gulag: Prisons, Surplus, Crisis, and Opposition in Globalizing California, she is a founding-collective member of California Prison Moratorium Project, Critical Resistance, Californians United for a Responsible Budget, and many other social justice organizations.

Mariame Kaba is an organizer, educator, and founding director of Project NIA, a grassroots organization that works to end youth incarceration. She has co-founded several organizations including the Chicago Freedom School and Love & Protect. Mariame is currently organizing with Survived and Punished to address the criminalization of survivors of violence. Her writing has appeared in various outlets including the Guardian, the Nation, In These Times and Truthout. Follow her on Twitter @prisonculture.

Mujahid Farid is a lead organizer at RAPP (Release Aging People in Prison). During his more than 30 years of imprisonment in New York State, Farid earned four college degrees and other certifications, including his paralegal certificate, New York State Department of Labor Certificate in Human Development Counseling, and New York City Department of Health Certificate in HIV/AIDS Counseling. He is also a founding member of the Prisoners AIDS Counseling & Education program.

Moderated by Abraham Paulos (Executive Director of Families for Freedom). Abraham joined Families for Freedom as a member, after he faced immigration detention. Before joining staff at FfF, he was a researcher at Human Rights First, focused on immigration detention. He also served as Program Director at Life of Hope, a community based organization in Brooklyn, which provides services to low-income immigrants. Abraham is an Eritrean refugee, born in Sudan and raised in Chicago. He is a graduate of George Washington University with a degree in International Affairs.

ABOLITION AND THE RADICAL IMAGINATION

Watch video and see pictures from the event here. 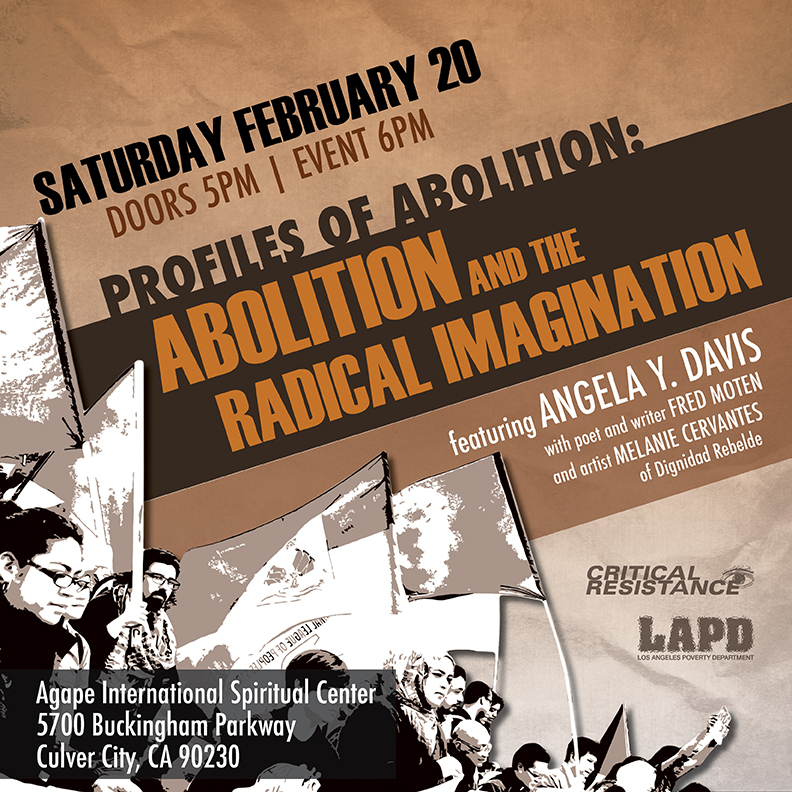 Critical Resistance and Los Angeles Poverty Department invite you to join us for Profiles of Abolition: Abolition and the Radical Imagination. We are excited to host acclaimed poet Fred Moten and renowned printmaker Melanie Cervantes of Dignidad Rebelde in conversation with Angela Y. Davis.

DR. ANGELA Y. DAVIS is Distinguished Professor Emerita of History of Consciousness and Feminist Studies at the University of California, Santa Cruz. Davis came to national attention after being removed from her teaching position at UCLA because of her activism and membership in the Communist Party, USA. In 1970 she was placed on the FBI’s Ten Most Wanted List on false charges. During her sixteen-month incarceration, a massive international “Free Angela Davis” campaign was organized, leading to her acquittal in 1972. Today Prof. Davis remains an advocate of prison abolition and has developed a powerful critique of racism in the criminal justice system. She is the author of many books, including her most recent collection, The Meaning of Freedom: And Other Difficult Dialogues (City Lights Open Media).

FRED MOTEN is author of In the Break: The Aesthetics of the Black Radical Tradition,Hughson’s Tavern, B. Jenkins, The Undercommons: Fugitive Planning and Black Study (with Stefano Harney), The Feel Trio and The Little Edges. A new poetry collection, The Service Porch, and a new collection of essays, consent not to be a single being, are forthcoming. Moten lives in Los Angeles and teaches at the University of California, Riverside.

A member of the Oakland-based arts collaboration Dignidad Rebelde, MELANIE CERVANTES is a Xicana activist-artist whose work includes black and white illustrations, paintings, installations and paper stencils. She is best known, however, for her prolific political screen prints and posters which have been used by movements across the globe.  Employing vibrant colors and hand-drawn illustrations, her work moves those viewed as marginal to the center — featuring powerful youth, elders, women, and queer and indigenous peoples.