Critical Resistance seeks to build an international movement to end the prison industrial complex (PIC) by challenging the belief that caging and controlling people makes us safe. We believe that basic necessities such as food, shelter, and freedom are what really make our communities secure. As such, our work is part of global struggles against inequality and powerlessness. The success of the movement requires that it reflect communities most affected by the PIC. Because we seek to abolish the PIC, we cannot support any work that extends its life or scope.

Critical Resistance’s vision is the creation of genuinely healthy, stable communities that respond to harm without relying on imprisonment and punishment. We call our vision abolition, drawing, in part from the legacy of the abolition of slavery in the 1800s. As PIC abolitionists we understand that the prison industrial complex is not a broken system to be fixed. The system, rather, works precisely as it is designed to—to contain, control, and kill those people representing the greatest threats to state power. Our goal is not to improve the system even further, but to shrink the system into non-existence. We work to build healthy, self-determined communities and promote alternatives to the current system. 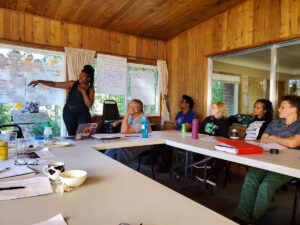 Critical Resistance (CR) is building a grassroots movement to challenge the use of punishment to “cure” complicated social problems. We know that more policing and imprisonment will not make us safer. Instead, we know that things like food, housing, and freedom are what create healthy, stable neighborhoods and communities. We work to prevent people from being arrested or locked up in prison. In all our work, we organize to build power and to stop the devastation that the reliance on imprisonment and policing has brought to ourselves, our families, and our communities.

What is the “PIC”? What is Abolition?
History of Critical Resistance
CR Structure & Background
Join Us

Critical Resistance is a national grassroots organization, meaning we have members across the US while primarily organizing through local chapters. Connect with one of our chapters below or learn more about CR’s organizational structure here. Find more updates on CR chapters’ campaigns and projects here.