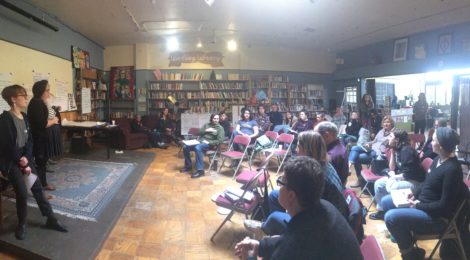 Portland, OR—Today, the Portland Police Bureau has requested an increase in city spending, a move strongly opposed by Critical Resistance Portland and other community organizations working against the violence of policing. The Portland City Council will begin the process of accepting and reviewing City Budget Office Requested Budget proposals culminating in approval of the 2017-2018 city budget by mid-June.

As the daily police harassment of working class, Black and Brown residents continues and with homelessness at an all-time and ever-increasing high, community organizations are demanding a redirection of funds out of Portland’s police budget and into increased social service spending.

On February 25th, dozens of Portland residents gathered to develop a coalition demanding mental health care not policing. “Portland Police Bureau’s record of responses to mental health crisis calls overwhelmingly generates more trauma, more violence, and more rupture in communities than actually providing true care,” said Cory Kirshner-Lira, a member of Critical Resistance Portland and one of the day’s organizers. “For this reason, the only solution is to divest from policing and invest in much needed social services, particularly de-escalation and access to crucial mental health services.”

Nowhere represented in the proposed budget for 2017-18 are increases in the funding of community based mental health services for the City of Portland. Critical Resistance Portland’s current campaign to decouple police from mental health first response has its origins in the expressed needs of the most targeted and policed communities in Portland, who have clearly demanded community self-determined solutions to mental crisis for years.

Increased funding for the police–adding more officers, advancing militarized technology, increasing surveillance apparatuses–will not build trust within communities which are most heavily targeted by the police. In the face of increasing policing and imprisonment on a federal level, and local collaboration with ICE and Homeland Security that threaten Portland’s immigrant communities, the City of Portland must use this budget to make a clear statement in defense of Portland residents by investing in community based resources and mental health care, not more policing.

← No Justification for the Violence of Policing: CRPDX on the Murder of Quanice Hayes
Resistance Against the PIC & International Women’s Strike →