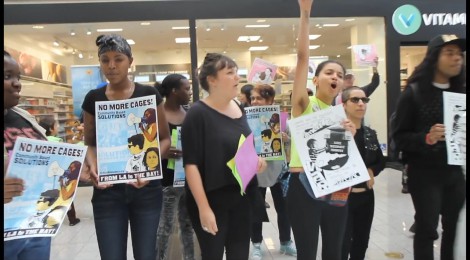 “We are fighting to bring our loved ones home. We are fighting for jobs, housing, education, and healthcare…We know this is what makes our communities healthy and strong.”

On Saturday March 15, 2014, Critical Resistance and its allies in the No More Jails Coalition converged in the food court of the Antelope Valley Mall and staged a peaceful and colorful protest against construction plans for a women’s jail in Lancaster. The controversial $200 million jail would add more than 1100 beds to the notorious LA County Jail system—which stands as the world’s largest. The project would have a particularly devastating impact on the county’s communities of color.

“The jail system in LA has cause horrendous damage to our loved ones and our communities,” says Gloria Galvez, of Critical Resistance, one of many organizations resisting the jail plan. “The women’s jail plan in Lancaster is being called a ‘women’s village.’ This is offensive. The LA County Sherriff is trying to sell us a bill of good, saying this jail will provide mental health, educational, and treatment programs. But we know jails are not effective social service settings. Especially not for women.”

In December, LA County was denied state funding for its expansion scheme and is expected to dip into its general fund to cover the growing costs of its construction plans. Several reports commissioned by the county itself have recommended the county not build, but instead explore options that would reduce the jail population such as community-based treatment options for individuals with mental health issues, sentencing reform, and bail reform.

Critical Resistance Los Angeles is organizing for divestment from imprisonment and draconian law and order policies that have made LA County notorious worldwide. Indeed, the LA County Sherriff’s department has been under multiple investigations for human and civil rights violations, and corruption. Earlier this year outspoken Sherriff Lee Baca stepped down suddenly amidst scandal. Organizers of today’s protest are demanding the county prioritize life-affirming programs and services. “We are fighting to bring our loved ones home. We are fighting for jobs, housing, education, and healthcare,” continued Galvez. “We know this is what makes our communities healthy and strong.”

Activists carried colorful signs, leading chants, and passing out information to mall-goers. Interviews with protest planners and picture and video of the action are available upon request, please contact crla@criticalresistance.org for more information.

← Issue 21 of THE ABOLITIONIST is Here!
Communities Fight Back Against Police and Militarization! →