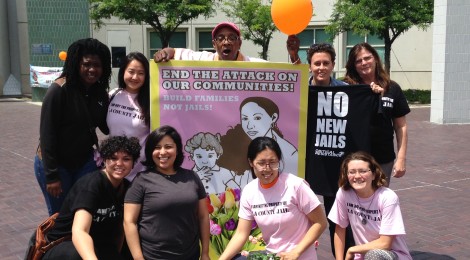 CRLA and LA No More Jails Coalition hosted a powerful event on Mothers’ Day at the Lynwood women’s jail. Members supported people exited the jail from visiting their loved ones on this special day by offering refreshments and flowers. Attendees learned about the campaign to stop LA County’s $2.3billion jail plan and shared their stories of the harms caused to their families by jailing. Their stories and instant photos taken of attendees will be shared with the LA Board of Supervisors as we continue to demand that the County stop building new jails and start building community resources.

This year is a pivotal year for the jail fight, as construction on the new women’s jail is slated to begin early next year. The LA No More Jails Coalition has been fighting LA County’s jail plan through its various forms since 2011, and we continue to build support and amplify the voices of those most directly impacted by the construction of a new jail. Sign our petition against the proposed new women’s jail.

The Coalition plans to host a similar event on Fathers’ Day at Men’s Central. Stay tuned for details.