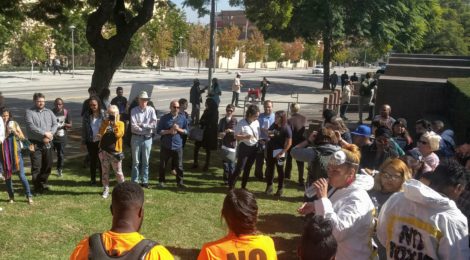 admin / November 7, 2016 / Comments Off on Continuing to Fight Jail Expansion in LA / Uncategorized

CR-LA and the LA No More Jails Coalition have been in the thick of the fight to stop construction of a women’s jail on toxic land in Lancaster, CA.This year has been full of action. You rallied and mobilized with us, and we so appreciate you sticking with us. Just in the past month, our powerful pressure, grassroots advocacy and expert testimony won a two-week delay in the Supervisors vote. In the build-up to winning this delay, CR contributed to “We are not disposable: The Toxic Impacts of Prisons and Jails”, a powerful report released through CURB (Californians United for  Responsible Budget) to ignite resistance to the expansion of the LA County Jail System. If you haven’t seen it yet, please read the press release here and the report here. Critical Resistance contributed research, writing and solicited testimony from imprisoned people in Lancaster to this report. The testimony from imprisoned people was key in making decision-makers pause for two weeks and consider the toxic choice ahead of them.

On October 25th, we again led a powerful mobilization to demand the Supervisors reject the Environmental Impact Report, but were, after our vigorous resistance, the Board of Supervisors shut the public out of the hearing. Behind closed doors, they voted to go ahead with the women’s jail construction plans and ignore the hazards of the toxic site, as well as the human and social hazards of jail expansion. It’s outrageous that they lead Angelenos along a path that squanders resources on caging people, and belittle the possibilities for diversion and real-community based resources and treatment for mental health needs. It’s shameful that decision-makers believe (or give credit to) the Sheriff’s fraudulent claim that the proposed women’s jail is a “Resource Center.” (Check out this “8 Steps to a Jail-Free San Francisco” tool that CR-Oakland made to show how bogus the idea of a “jail” as a treatment center is.) However, because of our work, the Sheriff can no longer frame the issue unilaterally in popular media, as you can see our analysis quoted in these articles from the LA Daily News and ABC7 News.

The fight is still on to stop the jail, and we’ll continue to fight the Sheriff, the Supervisors, and their false claim that this new jail on toxic land is a well-intentioned “treatment center” for women. While decision-makers have decided to move ahead, the fight is still on, and we want to be sure that you stay with us for the next leg.

For us in CRLA, we have been focused on paving the way for an LA that does not waste resources on state violence and jailing, but one that invests in healthy, strong communities: healthcare, education, stable housing, meaningful jobs. This is what abolition looks like in practice as we fight for the LA we want and need. We will keep fighting for a jail free LA!

← “That money needs to be spent in my community!”
Atlanta continues to stand for abolition →