FRESH OFF THE PRESS 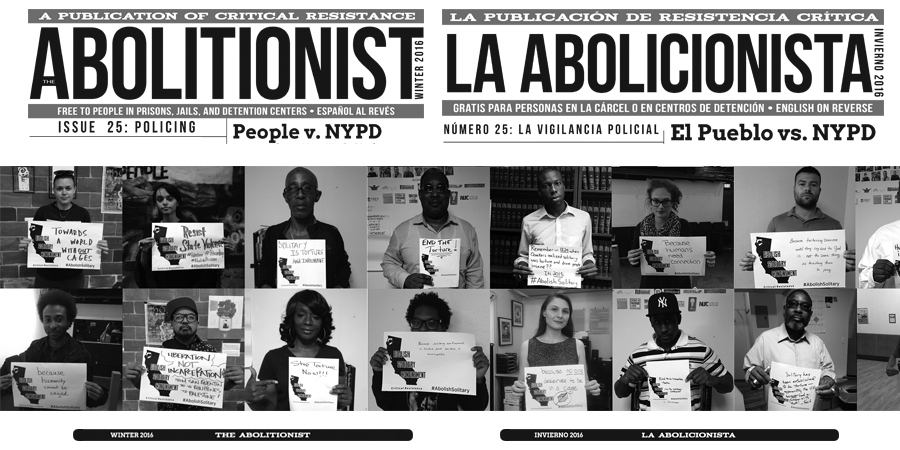 Issue 25 of The Abolitionist is here! This issue we delve into Policing and Abolition with hard hitting pieces from powerful authors like Fred Moten, Robin D.G. Kelley, Rachel Herzing, Aida Seif al-Dawla, Ali Issa, and Chanelle Gallant, who lend a critical eye to the various movements against policing. Their insights are particularly impactful as community organizing against the cops continues to grow “After August 9,” as Herzing’s piece is titled, when Ferguson and the rest of the country rose up against the murder of Michael Brown.

We begin from an understanding of policing as a social relationship made up of a set of practices that are empowered by the state to enforce social control. Rather than a discrete agency serving a separate purpose, policing is a defining feature of the prison industrial complex (PIC).

Refusing an ever-narrowing path from court room to cage, PIC abolition and the fight against policing is led by a vision of liberation that grows our capacity to care and resist, to overcome state and interpersonal violence, and transform our conditions in addition to ourselves. We publish The Abolitionist as a labor of love and struggle, and we create and share this resource with hope that it will nourish our common fight to create a life and world free from the violence of prisons, policing, and empire.

Finally, we celebrate and are inspired by victories everywhere, as with the various pieces in this issue that lift up the historic Ashker v. Brown settlement win reached by solitary prisoners in California against the prison regime’s notorious use of isolation.

The Abolitionist is a bilingual publication circulated to 4500 people in prisons, jails, and detention centers free of charge.  Paid subscribers help ensure that imprisoned people continue to receive those free copies. The paper is an important educational tool for people on both the inside and outside to grapple with the reality of the prison industrial complex and to learn about the different ways our communities are struggling against it. Each issue is primarily composed of pieces submitted by prisoners, former prisoners, and anti-prison advocates.

If you’d like to submit content, send your submission to:
The Abolitionist (c/o Critical Resistance)
1904 Franklin St., Suite 504
Oakland, CA 94612