On Saturday April 7 2018, over 150 members of different campaigns, projects, and coalitions fighting against the violence of policing and imprisonment attended a half day summit at City College of SF Mission Campus titled Joining Forces Against Policing and Jails in San Francisco. The powerful gathering was organized by the No New SF Jail Coalition, and sought to strengthen connections between organizations to better address the interlocking impacts of imprisonment, policing, surveillance, courts, and prosecution in San Francisco.

The motivation for organizing the summit was to respond to a growing trend over the last year: that while there is increased City and County attention to closing the jails at 850 Bryant and implementing bail reform, there are simultaneous efforts to increase the police targeting, arrest, and prosecution of San Francisco communities. Through interactive workshops, trainings, and panel discussions, participants discussed topics such as jail construction, gang injunctions, targeting of immigrants, justice for community members murdered by police, tasers, bail reform, increased policing on our streets, and the need for our struggles around these issues to be connected and united.

The day kicked off with an opening by members of Critical Resistance Oakland and the No New SF Jail Coalition. Organizer Nick DeRenzi noted that “Our struggles and resistance against the prison industrial complex – jails, police, courts, surveillance, prosecution – is a fight for racial and economic justice in San Francisco.” He called out San Francisco’s policy of increased policing and gang injunctions which facilitate the massive displacement that poor, Black, and Brown San Franciscans are experiencing.

The opening was followed by a panel of organizers moderated by Woods Ervin of Transgender, Gender Variant and Intersex Justice Project which has been working to close the jail at 850 Bryant and ensure no new jails are built. Panelists included Jose Bernal of Hospitality House and No Gang Injunctions coalition, Liz Kroboth from Do No Harm, a coalition of health workers organizing against police violence, and Gloria Esteva-Martinez, member-organizer at Causa Justa/Just Cause who spoke about immigrant justice organizing in San Francisco.

Saturday, April 7th was also the 2nd anniversary of the police murder of Luis Gongora Pat, who was homeless and a Mayan immigrant. At noon, family members and organizers with the Justice for Luis Gongora Pat committee led the group in honoring all those killed by SFPD, chanting “Upaytale,” Mayan for “Yes we can” stop the violence of policing. The family is demanding justice and accountability by working through the current legal system, by asking for the prosecution of the officers that killed Luis or for District Attorney Gáscon to resign, while also advocating for the abolition of policing. 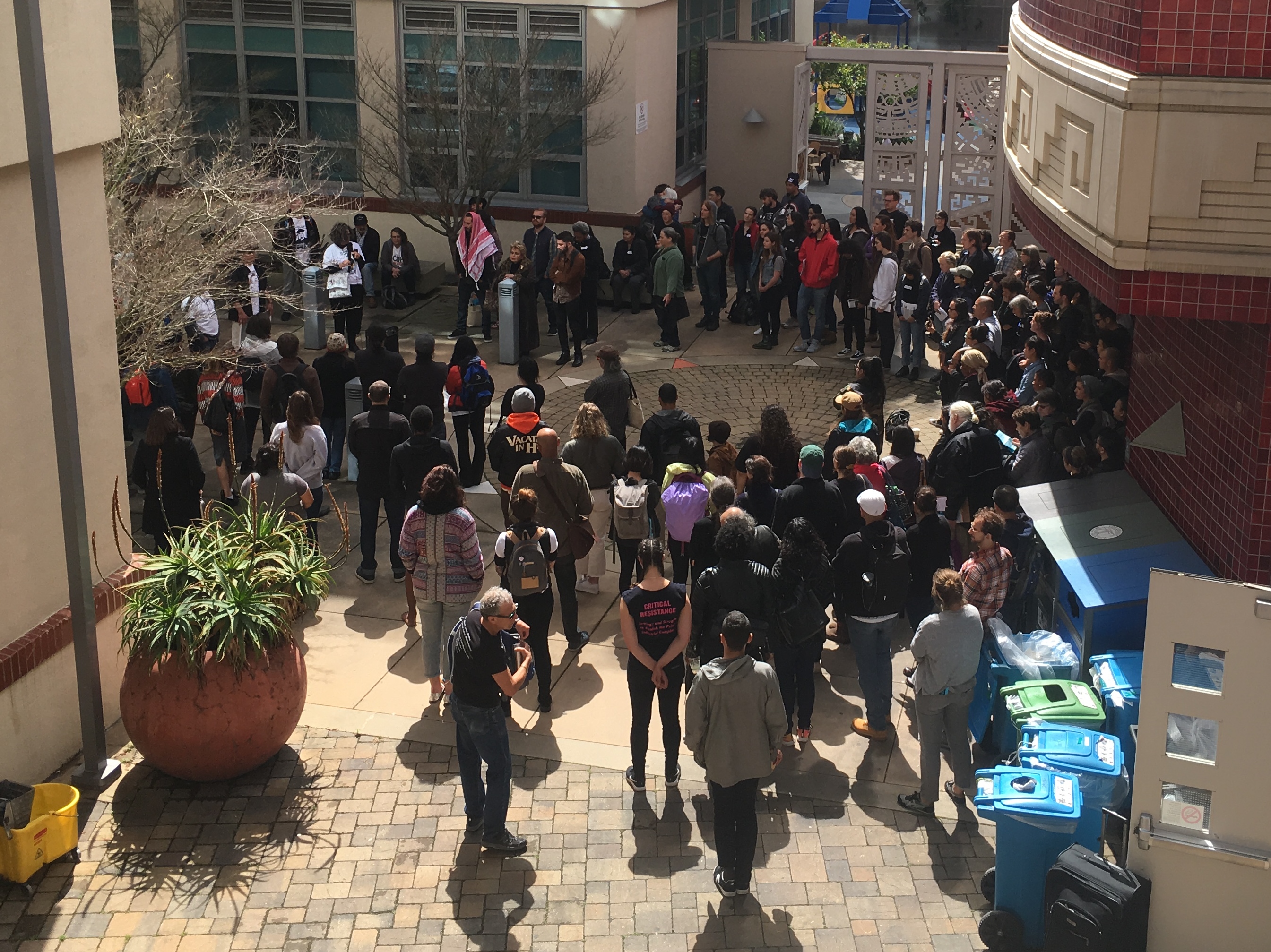 understand the overlapping issues of their campaigns. Through the discussion organizers determined it was time to create a city wide platform to address and fight back against the impacts of the prison industrial complex and the misuse of city resources. Some in the room were student organizers looking to ensure free education, those fighting for a people’s budget, folks fighting against the impacts of policing, and family members from those murdered by SFPD. It was determined we must work to dismantle the Prison Industrial Complex in SF, while working to reallocate resources to community based programs and services.

To close out the day organizers Gloria Esteva-Martinez and Nick DeRenzi lead those in attendance in the Asata Shukur chant, “We have nothing to lose but our chains”. The summit was just the next step in a people’s struggle for community care that doesn’t include policing or jails. Organizers hope to continue the momentum and inspiration from the day by continuing to struggle and build together. As Jose Bernal mentioned in the morning panel, “I really think… that we should start joining our forces as a coalition of coalitions and really take on this power, because we’re the last ones here.”