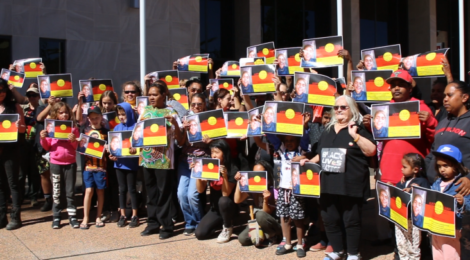 AUSTRALIA: GLOBAL DAYS OF ACTION TO END DEATHS IN CUSTODY, SHUT YOUTH PRISONS AND BRING PEOPLE HOME – SEPTEMBER 28, 29, 30
In Australia, 98% of imprisoned youth are indigenous and first hand testimonies as well as reports have detailed the horrific abuse of youth in Australian prisons. There have been numerous commissions to address the violence of imprisonment without any change. Just days ago the life of Tane Chatfield, a 22 year old native young person, was taken away in an Australian prison. Imprisonment has historically been used as a tool for settler colonialism, and we see that this is an ongoing practice in Australia as well as here in the colonial US where indigenous communities are imprisoned at a rate 38% higher than the already extreme national average.

Shut Youth Prisons Mparntwe (Alice Springs) is a group taking local action against abuse in prisons and working to abolish the practice of youth imprisonment in Australia. Critical Resistance stands with Shut Youth Prisons Australia’s call to end deaths in custody, shut youth prisons, invest in community led alternatives, and bring youth home. The only solution to ending the violence of imprisonment is closure.

Learn about the Shut Youth Prisons campaign and uplift their call to action on social media.

In San Francisco, Los Angeles, and New York City, Critical Resistance chapters are fighting against jail expansion, and like comrades in Australia, to abolish the use of this tool of white supremacy. In these campaigns, we see how youth are primary targets for policing and surveillance, and anti-imprisonment organizers in each city are increasingly pushing against the use of imprisonment of youth up to age 25 as one strategy among many to reduce jail populations.

Join us for a video call between Shut Youth Prisons Australia and Critical Resistance members working on fighting jail expansion. We will hear updates from Shut Youth Prisons’ campaign and discuss models for abolition across borders.