Browse: Home   /   The Devil is in the Details of Decarceration: Work Group meets to discuss closing jail and building alternatives 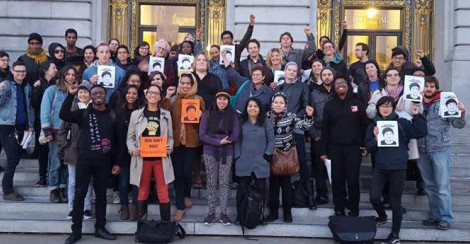 The Devil is in the Details of Decarceration: Work Group meets to discuss closing jail and building alternatives

admin / March 15, 2016 / Comments Off on The Devil is in the Details of Decarceration: Work Group meets to discuss closing jail and building alternatives / Uncategorized

SAN FRANCISCO – Today members of the Work Group to Re-envision the Jail Replacement Project met for their first session to discuss closing the jail at 850 Bryant and developing a proposal to build community based alternatives to address San Francisco’s needs. On December 15th, 2015 when the No New SF Jail Coalition successfully compelled the SF Board of Supervisors to unanimously vote against accepting $80 million from the State for building a new jail. The Work Group was established by Board of Supervisors’ resolution on the same date.

The Work Group brings together community advocates such as Windy Click with California Coalition for Women Prisoners, Phoebe Vanderhorst with All of Us or None, and Lizzie Buchen of Californians United for a Responsible Budget; City Supervisors Jane Kim and London Breed; and other agencies providing mental health needs and reentry services. Their shared goal is to provide a draft proposal by the end of the summer to be revised and forward to the Board of Supervisors and Mayor in November 2016.

President of the Board of Supervisors London Breed opened the meeting remarking that “more than a building, we need to tear down the system of mass incarceration” and adding that the City “can build a better facility that serves the population and departments that we want to serve with the people that we see on our streets every day.” Last week, the Department of Public Works sent a letter to the Board of State and Community Corrections seeking an extension on the State’s funding deadline “of up to 180 days to prepare an official response to the BSCC on whether to accept the award and build the project as proposed,” however Dept Director Mohamed Nuru stated today that this extension would not interfere with this Work Group’s proposal. Many Work Group members seem resolute to not build the jail as originally proposed to the State, including San Francisco Public Defender Jess Adachi who commented “It’s our mission to get people out of jail so I think we’re right up your alley.” Though there seems to be broad alignment on closing 850 Bryant, the Work Group will meet through October to develop the proposed details of implementation.

Over a dozen members of the No New SF Jail Coalition attended the meeting to give public comment and plan to attend each monthly meeting of the Work Group to hold the Group accountable to proposing alternatives and addressing root problems in our communities, not building any sort of locked or secure facility. This perspective was reiterated by a member of the Work Group, Lisa-Marie Alatorre from the Coalition on Homelessness who said,  “I’m excited to talk about how we can get people housing and treatment without being a part of the system of criminalization.” People who are homeless or in unstable housing are targeted by the police and often more susceptible to arrest. About 25% of those in jail were homeless before being imprisoned and many more may be homeless upon release. Providing more housing for SF residents will reduce arrest and jail population numbers in the long run.

District Attorney George Gascon indicated that “we don’t have a jail bed problem we have a mental health bed problem,” however No New SF Jail Coalition members reiterated that a locked mental health treatment facility such as the Miami Model being investigated by Gascon’s office is an unacceptable alternative. Woods Ervin, a member of the Work Group representing the Transgender Gender Variant and Intersex Justice Project, an SF-based organization that works with people in prison, said, “We want community-based treatment or residential facilities; we do not want more cages in the form of mental health facilities that strip people of their rights and restrict their freedom of movement.”