Remembering the Nakba and the ongoing struggle for liberation.

This Sunday, May 15 marks the 68th anniversary of the Nakba, or “catastrophe,” when the state of Israel was created in 1948. Driven by the racist and settler-colonial ideology of Zionism, the newly established state and its armed forces displaced over three quarters of a million native Palestinians, and committed massacres that wiped out entire villages. Yet after decades of colonization, ethnic-cleansing, apartheid, and imprisonment, we honor the resilience of the Palestinian people, as their commitment to liberation and returning to their land remains as steadfast as ever.

We at CR understand that our work to abolish the prison industrial complex (PIC) is part of global struggles for liberation. Because Israel has built itself up as a military state, it plays an “expert” role globally in developing and sharing repressive tools and tactics that are “field tested” on the Palestinian population. Along with the U.S., Israel also has one of the highest imprisonment rates in the world, with around 800,000 Palestinians imprisoned at some point since 1967 – about 25% of the population. Because of Israel’s fundamentally repressive role against Palestinians and movements worldwide, the fight against the PIC must also include anti-Zionism.

Despite living in such oppressive conditions, we are profoundly inspired by the growing Palestinian resistance to Israeli state violence, as well as the proliferating solidarity all over the world. Participants on a recent anti-prison, labor, and academic delegation, which included CR cofounders, members, and community advisors, stated after their return, “As strongly as we were compelled to examine the shameful and brutal history of Zionist colonialism in Palestine and the harrowing conditions of Palestinian life, we were in turn compelled to learn about the continuous resistance of the Palestinian people. Time and again, people expressed their commitment to ensuring that Palestine will be free.”

We stand in deep solidarity with those fighting against dispossession, Zionism, and state violence in Palestine and everywhere. Our commitment to commemorating the tragic histories and events of oppressed peoples, such as the Nakba, is grounded in honoring the long history of struggle and continued resilience. As we wrote in a pamphlet made by the Freedom Archives for Palestinian prisoners and organizers, “The beautiful solidarity between movements in the U.S. and Palestine is growing exponentially, and we remain committed to building strength and international support across our borders.” 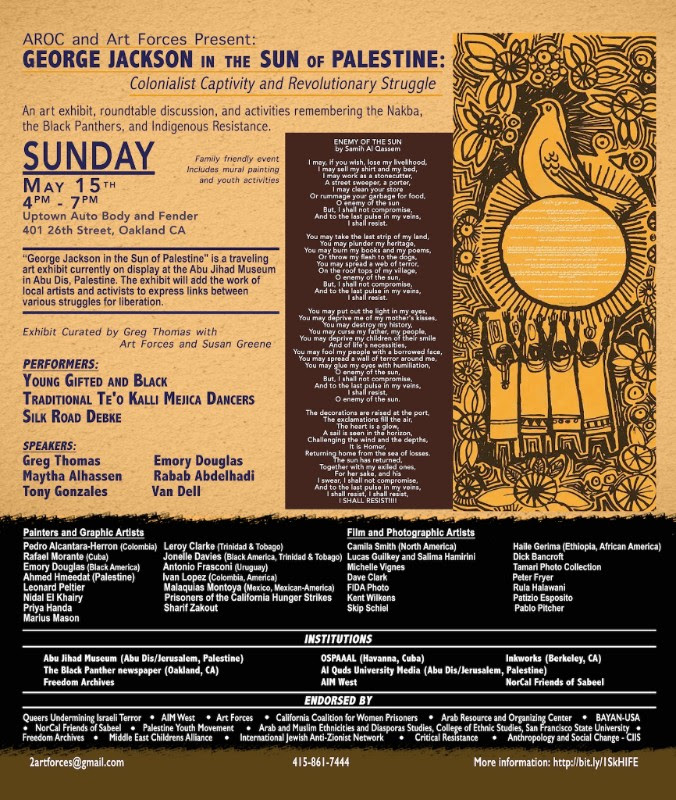 George Jackson in the Sun of Palestine

An art exhibit and discussion commemorating the Nakba, the Black Panthers, and Indigenous Resistance. Hosted by the Arab Resource and Organizing Center and Art Forces. Sponsored by CR Oakland.

Politics of Incarceration in Palestine and the U.S.