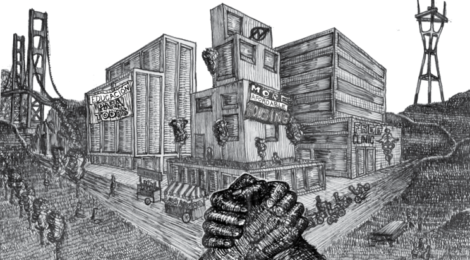 admin / March 19, 2018 / Comments Off on To Stop Police Murders, Abolish the Police / Uncategorized

On March 6th 2018, the San Francisco Police Department fired 99 shots at Jesus Adolfo Delgado, killing the 19 year old resident of the Mission District. Almost immediately, the media and SFPD shamelessly began to paint a picture of a violent suspect in order to justify their murder. The police will always seek to demonize the people and the communities they target, however we know there is never justification for the violence of policing, let alone for firing the 99 shots that killed Adolfo Delgado, an undocumented youth who – according to friends and family – was hiding because he feared deportation.

When cities prioritize funding for policing and imprisonment, they are funding a war on our communities, particularly on Black, Brown, working class, and poor people. Growing gentrification and the forced displacement of working class communities of color are aided by police departments, privatized security forces, judges, and district attorneys working together to expedite arrests and prosecutions in order to empty city homes and streets and make way for new wealth. In San Francisco, this story is told most clearly by looking at the numbers and demographics of the jail population – despite the rapid displacement of Black people in the City, now only 3%, Black people caged in the SF jail system has remained steady around 50% of the overall jailed population. Across the Bay in Oakland, Sahleem Tindle was brutally murdered by a BART cop on January 3rd. Just this week on March 11th, another man, yet to be publicly identified, was shot and killed by the Oakland Police Department near MacArthur BART.

Adolfo Delgado’s family, friends, and community members impacted by his murder organized to call for justice. Justice demands that San Francisco address the root causes of what led to this shooting: the targeting of undocumented communities by immigration enforcement, the growing numbers of police on San Francisco streets, an escalating support for militarized policing tactics rather than deescalation, and the gentrification and poverty that leaves people more vulnerable to be targeted by police.

Critical Resistance Oakland stands with Adolfo Delgado’s and Sahleem Tindle’s loved ones in their demands for justice, and supports the many efforts aimed at fighting the system of policing in the Bay Area. The violence of policing must be addressed by eliminating gang injunctions, defunding police departments, reducing the number of cops patrolling our streets, stripping the power of police officers’ associations, ending police militarization programs such as Urban Shield, and rejecting the purchase of new weapons or surveillance technology. It is efforts such as these that will reduce the police’s ability to harass, harm, and kill our community members, and ultimately, bring us closer to a vision where our communities live free from state violence.