Portland continues to anchor the Care Not Cops campaign that is working to end the inherently violent and racist policing of Portland’s communities of color. Our work is rooted in the belief that policing endangers the health and well-being of communities. CNC understands the role of policing in enforcing social control and white supremacy which fuel gentrification, displacement, repression, and disempowerment of Black, Indigenous, and other communities of color. Currently our campaign aims to dismantle the gang policing unit of the Portland Police Bureau: the Gun Violence Reduction Team (GVRT). Anti-gang policing intensifies the violence, criminalization, and surveillance that is characteristic of policing as a whole.

Since 2017, the Care Not Cops campaign has fought successfully for reductions in the Portland Police Bureau budget with particular focus on preventing increases in police officers, technology, and community policing programs. We have demanded the city end the use of police as first responders, invest in voluntary user-led mental health care centered in the hands of the community, and dismantle the gang policing unit of the PPB. We continue to call for a reduction in police spending towards ultimately disarming and defunding the police.

City Council passed the 2020-21 Portland City budget in June, with a $15 million cut from the proposed Portland Police Bureau budget, in addition to the 5.6% cut across all bureaus due to the COVID deficit. This included: The elimination of the Gun Violence Reduction Team, School Resource Officers, and PPB Transit Police, 8 positions cut from the Special Emergency Reaction Team, $2.8 million in cannabis tax dollars moved from the PPB budget and towards restorative justice grants, $4.8 million directed towards Street Response, $1 million diverted towards houseless-led participatory budgeting process. 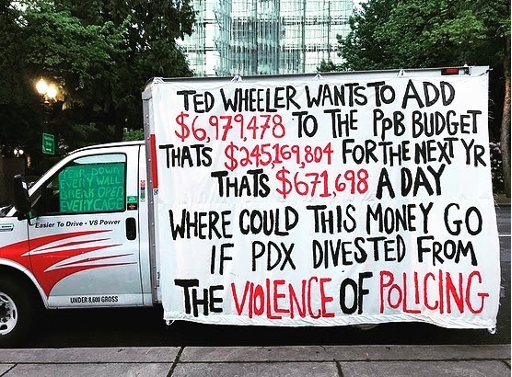