Critical Resistance stands in solidarity with Palestine and is deeply opposed to Israel’s continued colonization, occupation, and use of imprisonment and administrative detention against the Palestinian people. As an organization dedicated to the abolition of the prison industrial complex, our work is part of global struggles against inequality and oppression.

The most recent Israeli military attacks against the Palestinian people has been an intensified campaign of violence and repression against Palestinians in Gaza, the West Bank, and cities across 1948 Palestine (also known as “Israel”). In the weeks leading up to the 73rd anniversary of the Nakba (“catastrophe” in Arabic, referring to Israeli expulsion of more than 700,000 Indigenous Palestinian people from their homeland in 1948) on May 15, 2021, Palestinians rose up to defend families that the Israelis were targeting for eviction from their homes in the Sheikh Jarrah neighborhood of Jerusalem. The Israeli military then escalated their violence – killing approximately 200 people in the last week – including elders and children. Israelis have executed targeted attacks meant to crush Palestinian resistance, by attacking the Aqsa Mosque, a national symbol to the Palestinians and the larger Muslim world, by targeting schools, and by bombing and razing a building in Gaza that housed international media outlets in an attempt to stifle news from circulating about Israeli attacks.

The prison has long functioned as a cog in the Israeli settler-colonial regime. Since its creation in 1948, the Israeli apartheid state has imprisoned over 800,000 Palestinians, which constitutes around 20 percent of the Palestinian population – the large majority of which have been held under military orders. Administrative detention is a procedure that allows the military to hold prisoners indefinitely on the basis of secret evidence without charging them or allowing them to stand trial. “There isn’t [a] single family that did not experience arrest, some numerous times,” states a report by the Palestinian Ministry of Detainees. “Israel turned every corner in occupied Palestine into a prison, detention camp and interrogation facility.”

However, the Palestinian political prisoner situation only reflects a larger, more systemic issue – the politics of colonization. As an abolitionist organization, not only does Critical Resistance call for the dismantling of Israel’s prison system, but also the corresponding economic, social, and political conditions that have created the mechanisms by which the Indigenous Palestinian population has been, and continues to be, ethnically cleansed from its native land for over seven decades.

We recognize the protracted history of state violence and social control that has characterized Israel since its establishment in 1948. The Gaza Strip – with an estimated 1.7 million people living on roughly 140 square miles – is one of the most densely populated regions on Earth; completely enclosed by a 26 foot wall that restricts anything or anyone from going in or out, it is often referred to as “the world’s largest open-air prison.” Israel claims to have ended its occupation of Gaza; yet Israel’s land, sea, and air blockade of Gaza has decimated the Gazan economy, rendering the population dependent on foreign aid. When even this minimal aid is prevented from entering Gaza, the land becomes uninhabitable to its Indigenous people.

The prison industrial complex (PIC) in the US has a natural ally in the apartheid state of Israel. Not only do US police forces regularly visit Israel to train alongside the Israeli military and learn how to better repress and control our communities, but Israel also directly and materially supports oppressive governments. For instance, when seeking to build his border wall, Trump looked to Israel’s apartheid wall enclosing Palestinians in the West Bank as a model, and looked to Israeli companies to build it. Each year, the US provides Israel with 3.8 billion in military aid funding, and in return, it gets access to surveillance technologies, new weaponry, and control tactics that Israel has developed and “battle-tested” on the Palestinian population. Just this week, the Biden administration approved a $735 million “precision-guided” weapons sale to Israeli forces. Collaboration between the US and Israeli apartheid demonstrate the PIC’s inherently global character.

Given the connections and relationships that oppressive forces have internationally, it is no surprise then that Black, Indigenous, immigrant, and working class abolitionist movements in the US share a deep struggle and solidarity with the Palestinian people against the apartheid state of Israel. Given the extensive use of imprisonment, surveillance and policing in the Zionist project, a victory for Palestinians would result in a weakened PIC globally.

In light of Israel’s most recent in a cycle of ongoing systematic attacks and continuing blockade on Gaza, and the ongoing colonization and occupation of Palestine, we join global calls of solidarity with the Palestinian people’s struggle for decolonization, liberation, and self-determination.

We stand in solidarity with the Palestinian people and praise their resilience and resistance to the Israeli apartheid state, including the general strike called by workers unions in Palestine. We join activists around the world in the growing international movement for a liberated Palestine and for dignity, freedom, and self-determination of all oppressed people.

We ask our networks and friends of Critical Resistance to support actions in solidarity with Palestine. Below are a few events coming up nationally online along with protests in some of our chapter cities or surrounding areas that we hope you consider supporting:

On the interconnectedness of state violence in Palestine, Colombia and Los Angeles. 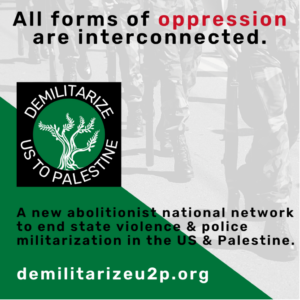 Launch Event for Demilitarize US to Palestine (Online)

Day of Action at the Israhelli Consulate in SF, in solidarity with the Palestinian uprising and general strike.

Block the Boat: The Zim Ship is Coming Back!

Day of Action at the Israeli Consulate in LA, in solidarity with the Palestinian uprising and general strike.

Protest outside Zionist Mission to the UN

From the Archives: 2016 US Delegation to Palestine Statement — “We Stand with Palestine in the Spirit of ‘Sumud’”

In 2016, CR was a part of a delegation of abolitionists, former prisoners, trade unionists and university professors who went to Palestine. Read their solidarity statement written after returning to the US here.