This week is as significant a time as ever to reflect on how the prison industrial complex (PIC) is deployed on behalf of the US colonial project, and in turn uplift the many examples of Indigenous resistance to it.

The current threat to the Indian Child Welfare Act (ICWA) being stricken down in the Supreme Court is a pressing issue to make note. In the US, Indigenous children are four times more likely to be placed in foster care – which is rooted in the practice of colonially motivated family policing that scholar Dorothy Roberts describes as a key part of the PIC. Indigenous communities have been working for years to mitigate the effects of targeting their youth – violating their sovereignty by ripping children from their tribes. In defense of the ICWA, members of the Navajo nation are resisting the moves being taken by the conservative majority Supreme Court to review the constitutionality of the practice of prioritizing keeping Indigenous children with Indigenous communities. Now more than ever, it is clear that abolition of policing and courts is necessary for the safety and self determination of Indigenous peoples. 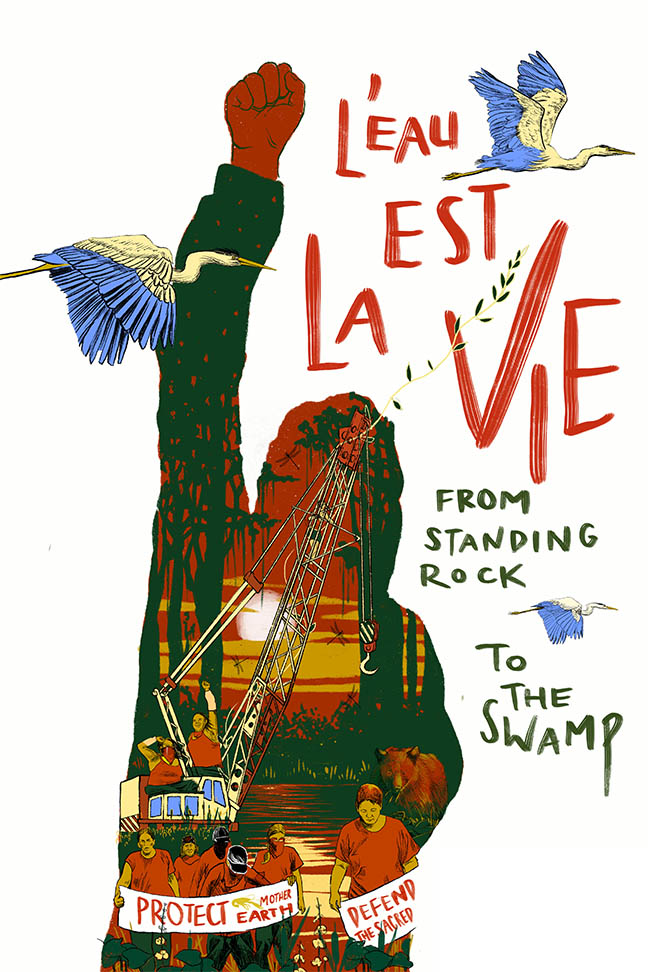 In DC, members of the American Indian Movement recently completed a walk for justice to support long held political prisoner Leonard Peltier. The march was to demand that President Biden follow the more recent releases of other long held political prisoners to release Peltier as well. The organizers walked at least 20 miles a day for 15 weeks, with community based rallies of support taking place to cheer them on along the route. The march closed with a rally at the Lincoln Memorial. The steadfast solidarity to fight for Peltier, incarcerated for 45 years and now the US’ longest held political prisoner – represents the commitment to liberation from the PIC and of self-determination that continues to fuel our movements.

We turn our eyes to Canada, where Indigenous people are five per cent of the population but make up a third of the prison population. In Saskatchewan, a province that has between 75 to 80% Indigenous people caged – hunger strikes have recently broken out in response to conditions inside. They began 10 weeks ago at Pine Ridge Correctional Centre – led by Faith Eagle. The strike began in response to conditions – with demands for clean water and food – but also uplift the large percentage of Indigenous population, especially women who are imprisoned. Incarcerated people across the prison system have been striking in support and  expected to continue.

When we look south, we see the continuation of over a year of mobilization by Indigenous peoples in South and Central America resisting the intensification of violence and militarization in their territories that is forcing many to migrate in order to survive. Although this is a long history of violence, there is an ongoing increase of militarization and violence in Indigenous territories that are the target of state and corporate interests for extractivism, tourism, agribusiness, hydroelectric companies. From the Patagonia to the Mexican-US border, different communities are standing in defense of life against what Moira Millán, a Mapuche “weychafe” (meaning warrior, guardian of life and territories) calls a “terricide” to name the different attacks of the colonial and capitalist systems on the earth, the ecosystems, the forests, the water, the bodies, and spirituality.

Marches and caravans are bringing Indigenous claims to the right of their land and community self-determination into attention.  On March 8, 2021, women from the Kichwas, Shuar, Achuar, Shiwiar, Waorani, Sapara and mestizas marched from the Amazonia to Quito to make their voice heard. Months after, on June 22, 2022, Indigenous communities marched again to the capital city, in the context of the National Strike in Ecuador that was called by the CONAIE – Indigenous Nationalities Confederation of Ecuador. The National Strike called for an end to neoliberal political economies that have resulted in an increase of poverty, extractive activities (mostly related to mining and oil), militarization, and repression of protest.  Also last year, in the Brazilian Amazonia, groups under the umbrella of APIB – Articulation of the indigenous peoples of Brazil, organized a week-long protest, camping in front of the Congress in Brasilia, to stand against the potential Supreme Court’s invalidation of Indigenous Land Claims. This was one of the many attacks on the Amazonia that the Bolsonaro administration placed since the beginning of his administration, backing up the interests of agribusiness, mining, and logging business. After the protest, the decision of the Court was suspended indefinitely.

Land expropriation, sustained surveillance, and political imprisonment are forms in which colonialism continues to harm Indigenous communities, forcing many people to migrate. In October, Mapuche women from the Lafken Winkul Mapu community stood in defense of their territory when during an intensification of repression that led to a police raid operation to forced them to leave their land in Villa Mascardi (Río Negro, Argentina), a rich territory that is target for tourist businesses. Nine of them were incarcerated along with their children, and three of them went on a hunger strike demanding the release, the demilitarization of their territory, and a stop to the persecution of their people. Since then, four have been sentenced and remain in home- arrest along with their children.

The struggle for their liberation continues, and attention has been placed on the question of state violence and control on indigenous children, who are incarcerated along with their mothers, or have to face imprisonment since the early days of life, just for being indigenous, or having to leave their territories in a very young age, in order to survive, many times to end in ICE cages in the north. In a moment where reproductive justice is at the center of many struggles, we see there is an opportunity for an international call to end the caging of children and their separation from their communities in different forms. With an increase of concerted violence in Guatemala and southern Mexico, there was a wave of migration of indigenous children last year. Forced migration and incarceration are forms of destroying indigenous rights to their land and community. As Gladys Tzul Tzul, a Maya K’ iche’ states, “What future awaits as indigenous communities while there are thousands of children Q’ eqchi’s, K’ iche’s, Chuj, Zapotecos, Triquis and of many other peoples detained on the border? What is the future of the children and youth who are being or will be deported?” The ongoing movement of various indigenous peoples is highlighting the need to put an end to the violence of criminalization and incarceration of migrant adults and children. 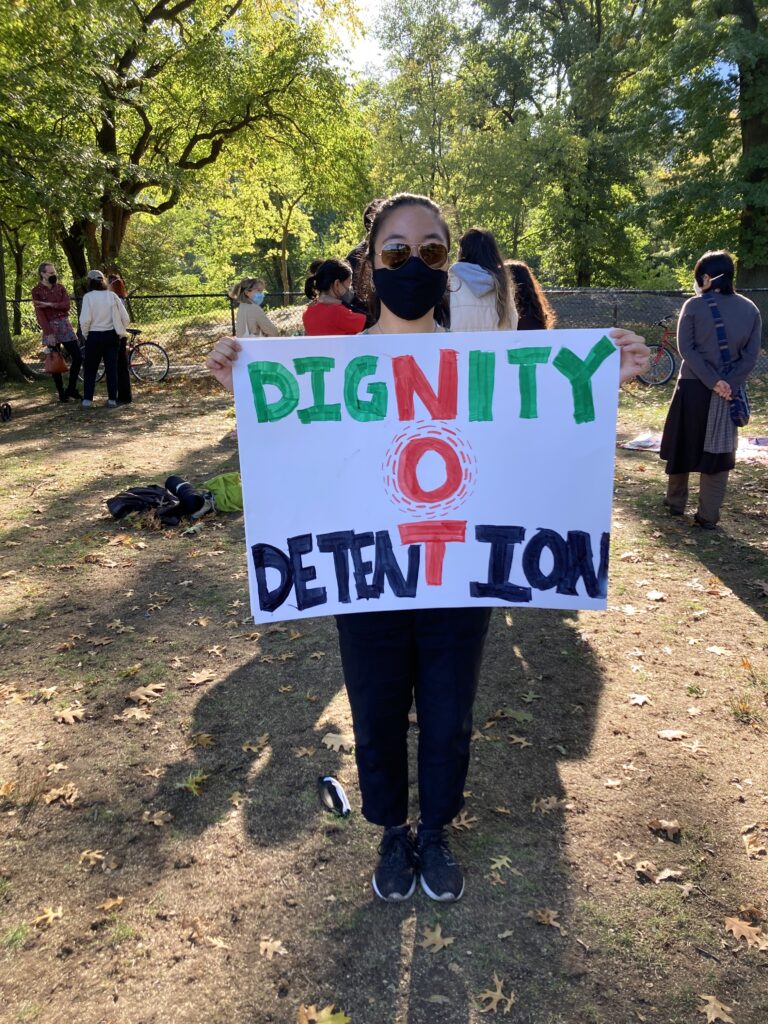 At CR, we work to shrink the power of the PIC locally, with an eye toward global impacts of weakening its ability to cage and control people. One way that we work in solidarity with Indigenous communities from the global south is through our work to end ICE contracts in NY via our work on Dignity Not Detention legislation as part of the Abolish ICE NY/NJ coalition. Part of the work requires supporting inside organizers who’ve engaged in hunger strikes to bring light to their conditions and fight for their release. These organizers have then shipped around the country in a bid by ICE to break their resistance. They remain steadfast and continue to fight for their freedom  and the coalition finds ways to continue to support them as we move the campaign forward. CR NYC has most recently been a part of an effort to raise $5K for their release. This upcoming year we the coalition is well poised to successfully wage our campaign and finally end ICE contracts in New York.

In California, as part of the prison closure campaign, the coalition that CR is organizing within, Californians United for a Responsible Budget (CURB), we are fighting to close 10 prisons by 2025. As part of the campaign, we are uplifting what can be done with the prison sites once they close. One central recommendation we are advocating for is for the state to return land to Indigenous communities in CA and provide resourcing to assist with remediation of the land as necessary. We understand that both tearing down cages while shifting power and resources to Indigenous communities as central to our practice as abolitionists.

The hydra that is the PIC continues its assault on Indigenous communities and we at Critical Resistance are excited to organize in solidarity. As Indigenous nations around the world fight against colonialism,  for a self determined future for themselves and the planet, CR will continue to be in joint struggle to fight back the PIC.

Onward toward abolition and a liberated future for us all,