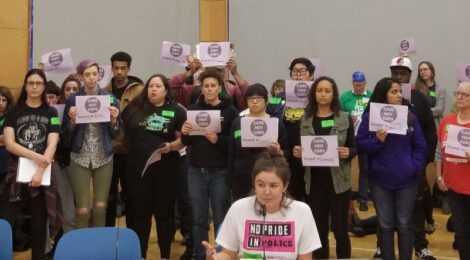 admin / May 10, 2019 / Comments Off on Portland Demands People’s Budget Over Policing / Uncategorized

On Wednesday, Mayor Ted Wheeler released his proposed budget for the City of Portland. This included a policing budget of $236,991,195, over $10 million more than last year! The Portland Police Bureau (PPB), with Wheeler at its helm as Commissioner, has been mired in controversy over the last year with collusion with prominent white nationalist groups, shootings of Black people and people perceived to be in mental health crisis, data uncovered on their racist gang enforcement traffic stops, and the fact that a shameful 52% of people arrested are houseless.

Care Not Cops (CNC) opposes any increases to the PPB budget. Over the course of last year, PPB increased their budget from the approved $227 million to $233 million – an increase that is easier for policing to achieve than most other departments. We anticipate that PPB will attempt a similar increase this year, pushing their budget even higher than the proposed $237 million, thus we stand even more firmly against this increase. We also continue to oppose the proposed funding in this year’s budget for body cameras which are not shown to reduce the occurrence of police violence but rather are used to surveil and criminalize community members.

Wheeler’s proposed budget does have a few positive aspects, including a proposed reduction of $2 million in the budget due to vacancy of 75 police officer positions. However, at a minimum salary of $61,000 per entry level officer, this amount should total at least $4,575,000, not including costs of benefits and taxes for these 75 vacant positions. Portland should continue to reduce the budget based on officer vacancy so that we move towards permanently reducing the number of police officers and reducing the budget. Care Not Cops supports the review and analysis of PPB directives and traffic stop data, however we demand this funding and all associated assessment be separated from the policing department.

Every year, community members testify at budget forums and mobilize in other ways in hopes of getting funds for critical services, housing, transportation, and this year—the parks and community centers. Meanwhile, the police budget only increases, and we can see the ways in which policing continues to perpetuate violence against Black, brown, houseless people, and against people in mental health crisis. While Wheeler’s proposal represents a slight decrease from the PPB proposal, the PPB is a department whose reach into Portland communities needs to be curtailed through reducing the budget, not by increasing it. We call on other City Council Members to use their powers to continue to reduce the budget.

Care Not Cops asks you to call or email the City Council members to call for reductions to the police budget and investments in life-sustaining services and resources.

As Portland moves closer to approving the budget for next fiscal year, I ask that you use your budgetary voting powers to reduce the violence of policing and build up community resources. As a resident of Portland, I’m deeply disturbed by the actions of the Portland Police Bureau in profiling, harassing, and killing Black people, houseless people, and people perceived to be in mental health crisis. Through the budget process you have an opportunity to end Portland’s racist anti-gang policing program, reduce the violence of the Police Bureau by eliminating their budget for filling vacant positions, invest in longterm solutions for Portland’s houseless community, and support residents’ mental health needs without policing. Ensure that Portland’s budget represents Portland’s values, reject the proposed $10 million increase to the Police Bureau.

Sincerely,
Name and Affiliation (if any)