No New Jails NYC formed in September 2018, shortly after New York City Mayor de Blasio launched the formal approval process for his jail expansion plan to build and renovate 4 new borough-based jails, in part as a response to growing public pressure to close Rikers Island. A direct continuation of the grassroots efforts to close Rikers immediately, No New Jails NYC also drew on the success of previous of jail construction fights in NYC.

As this jail proposal expanded, No New Jails NYC  organized for years to build a strong community resistance to the Mayor’s plan and demand that the City close the jails at Rikers without building any new jails.  In 2019, No New Jails NYC fought fiercely as the Mayor’s jail expansion plan included massive new jails to be built in neighborhood locations in Manhattan, Queens, Brooklyn, and the Bronx.

At the same time, No New Jails NYC built power in communities throughout New York City and with its imprisoned members. Overwhelmingly, New Yorkers agree that all efforts should be dedicated now to closing all jails on Rikers Island, that there is no need to build any more jails, and that the billions of dollars budgeted for new jails should be redirected instead to community-based resources that will support permanent decarceration. 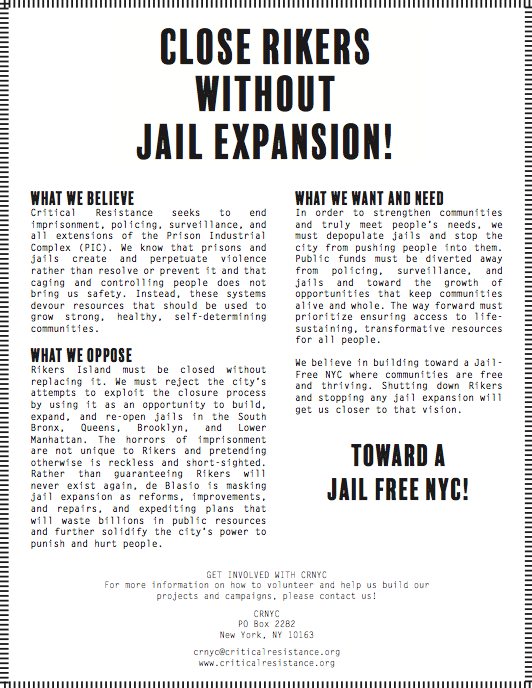 Early Thursday morning, August 16, 2018, Mayor de Blasio released his updated borough-based jail expansion plan along with a collection of carefully curated brochures. CR NYC and other community organizations have long taken the position that the city must work to immediately close Rikers without constructing new jails but rather through strategies that reduce imprisonment and policing. Now, after years of keeping the public waiting and many differing pieces of information on this issue, the city formally unveiled details about the siting of new jails across the four boroughs, with each of the jails caging 1,510 community members.

The plan for a new Bronx jail was especially egregious considering widely-covered resistance to the NYPD Tow Pound site by Bronx community groups, some clearly calling for no new jails in the South Bronx, and no new jails anywhere. This news follows information leaked the previous week asserting what we now see is true – that the City is considering gutting a lower Manhattan government building and constructing a 40-story jail in its place. The same massive construction project could be true for other jails, as the Brooklyn House of Detention site is zoned to allow for a building up to 40 stories as well. The City planned to build structures to imprison 6,040 people over 6,370,000 gross square feet of new jail space.

“Politicians are exploiting our communities while expanding our jail system. I invite the Mayor to prove our communities wrong. Show us proof of how following mayors won’t reopen Rikers Island. We’ve heard their lies before. Years ago they promised the barge would close and it remains open. We need to end bail, end plea bargains, stop kidnapping us for years at a time waiting for a trial we have no resources to win. We don’t need lies and we don’t need any jails.”