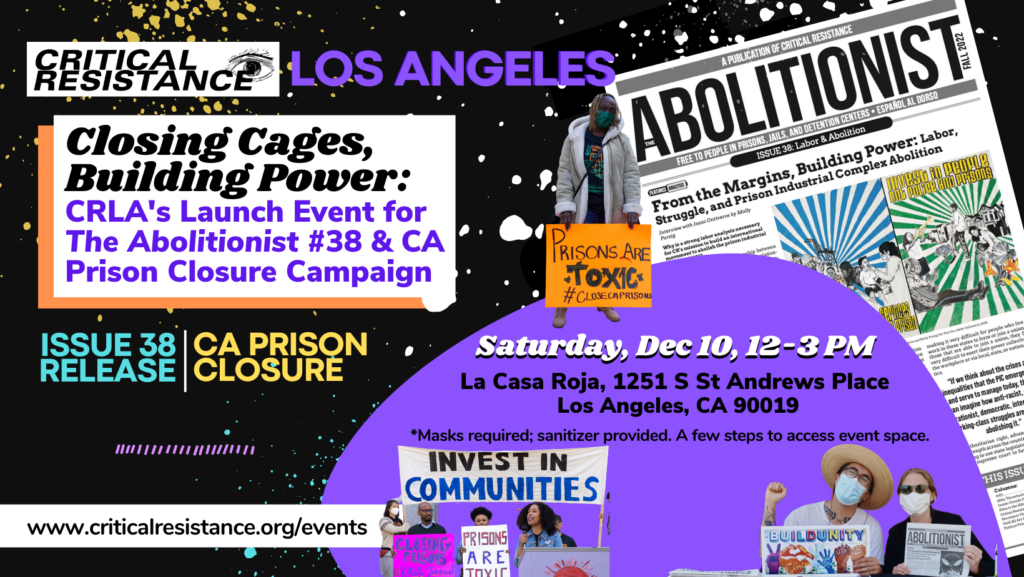 Join Critical Resistance LA (CRLA) on Saturday, December 10 for a community event building LA presence and power in the statewide fight to close 10 CA prisons by 2025, and to celebrate the release of CR’s newest issue of The Abolitionist newspaper, issue 38 on labor struggles and prison industrial complex (PIC) abolition.

Prison closure is on the horizon across California, with three prisons already slated for closure by Governor Newsom’s administration. California’s prison system has destabilized Black, Brown and working-class communities for more than forty years. Constructing 22 prisons between 1984 and 2013, California disproportionately cages more people of color than any state of the former Confederate South, and has one of the highest incarceration rates in the world. Between 1986 and 2006, the state prison population jumped to staggering heights, from 60,000 to nearly 175,000 people. Each year of life served in prison decreases an individual’s life expectancy by an estimated two years. The physical and psychological devastation caused by prisons is intensified by persistently unaddressed environmental hazards including toxic water quality, poor air quality, and soil fungus that causes the lung infection Valley Fever, all exacerbating threats to life.

Los Angeles county has a vested interest in the fight to close prisons across the state.

Of 58 counties total, CA prisons snatch more people from Los Angeles than any other county, and according to the 2020 Census, more than 40,000 people caged in California state prisons call Los Angeles county home. Essie Justice Group and Prison Policy Institute released a new report this year revealing that the 14 Los Angeles neighborhoods with the highest imprisonment rates are clustered in South Central Los Angeles, where 57% of residents are Latinx, 38% are Black, only 2% are white, gravely impacting the health and stability of the families and communities left behind. 1 in 4 women and 1 in 2 Black women in Los Angeles have an incarcerated loved one.

It is no surprise then, that Los Angeles also has the largest jail system in the world. In 2019, there were 17,385 people in jail in Los Angeles County. Additionally, CA spends a ridiculous ~$3.6 billion caging LA communities, which could be much better used to feed ~300,000 families for a year or house ~600,000 folks for a year.

Given the role of the PIC as a counter-insurgency effort since the 1960s-1970s to decimate the organizing power of the working class, especially those in Black, Latinx and communities of color, it is also no surprise that LA has been a ground zero for the fine-tuning of and training for different policing, surveillance and imprisonment strategies for decades. With LA being one of the largest manufacturing workforces in the US, including one of the US’s largest ports and one of the largest urban, majority of color, working-class populations in Global North, LA has a fierce labor legacy from the Bus Riders Union to the more recent victory won by the LA teachers Union in 2019.

Closing ten prisons in five years would be a truly bold step toward a better, more just, equitable and free LA. The CA prison closure campaign with Californians United for a Responsible Budget (CURB), a statewide coalition of 70+ organizations, builds off the long legacy of organizing and people power—including historic LA-based labor victories—that has led to the decline in imprisoned population for the past 20 years and lowest it’s been in 30 years. Just as CRLA worked with CURB, LA No More Jails, and most recently Justice LA successfully fighting jail expansion in LA County for over a decade since 2009, our work joining forces again with CURB will surely result in another monumental victory against the PIC.

Prison closure is a workers’ struggle.

We’re calling on all LA workers to join us in stopping the extraction of more of our loved ones by closing the cages the state fills with our communities! 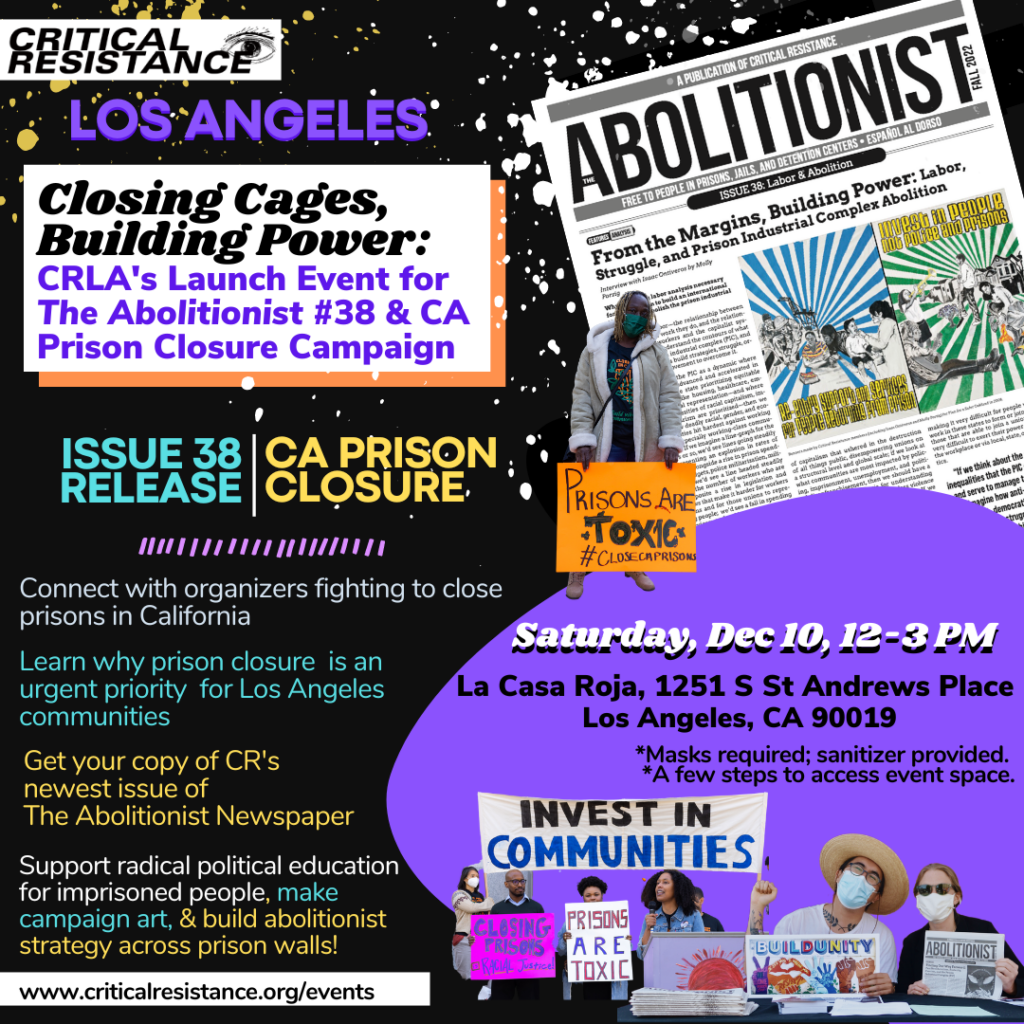