Numerous organizations across our movement to abolish the prison industrial complex have been fighting tirelessly to “Free Them All For Public Health,” as more and more the COVID crisis reveals imprisonment as the public health crisis that it is. By July 7, 2020, at least 57,019 people in prison had tested positive for COVID, a 9 percent increase from the week before, according to the Marshall Project. In June, states like Michigan, Ohio, Tennessee and Texas began mass testing of prisoners, and new cases began to decline. However, in the past month new outbreaks spread through prisons in California, Texas and Arkansas.

While organizations have taken up different strategies and tactics these past few months to get prisoners released immediately, from calls for Governors to grant emergency clemency, to solidarity actions and caravans outside of jails and prisons in multiple states, to bolstering community bail funds and working to end cash bail, and permanently shutting down county jails, prisoners inside have also been resisting and organizing— from hunger strikes in jails and detention centers in multiple locations to most recently prisoners leading the charge for mass releases and swifter COVID-response.

Asar Amen, a subscriber and contributor of The Abolitionist newspaper, imprisoned on a life without parole sentence in CA, told Critical Resistance:

“What’s happening in this moment is inspiring. I’ve been so tired of the word ‘reform.’ Things need to change. As James Baldwin said, ‘Do I really want to be integrated into a burning house.’”

After 121 prisoners from California Institution for Men (CIM) in San Bernardino County, a known prison “hot spot” for COVID-19 with over 500 active cases and 15 COVID-related deaths, San Quentin State Prison has experienced its first wide-spread outbreak. Prior to the transfer, San Quentin had no confirmed cases, and now reportedly has over 1,600 COVID cases and climbing. Immediately after the outbreak, prisoners released a set of demands that outside organizations have been working to uplift to the CDCR and the Governor of CA. Solidarity has included actions outside of the prison on June 28th, as well as larger caravan actions and mobilizations to both the state capitol on July 1st and outside Governor Newsom’s home in Sacramento, CA on July 5th. Another Day of Action in Sacramento–Starting with a #SayTheirNames action followed by a car caravan and vigil– demanding immediate prisoner release is planned in the capitol for next week on July 16.

Critical Resistance has been fighting for prisoner releases through our chapters engaged in anti-imprisonment coalitions in both the West and East Coasts, from our Oakland Chapter in the No New SF Jail Coalition, to our LA Chapter fighting jailing and policing through the Justice LA Coalition, to the Care Not Cops Campaign in Portland PDX, and Free them All 4 Public Health efforts in New York with our movement partners stemming from No New Jails NYC. 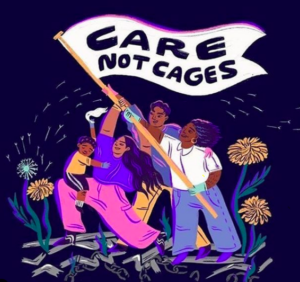 This past week, our LA Chapter and the Justice LA Coalition won two monumental campaign goals. After mobilizing over 17,000 public comments to LA record, Justice LA effectively pushed the Board of Supervisors to commit to closing Men’s Central Jail within the next year, and to create an alternative to imprisonment fund as a step of moving the city to Care Not Cages!

In addition to driving our coalitions and grassroots campaigns forward, each of our chapters also continue to correspond with prisoners through Prisoner Mail programs, building political relationships, and sharing political education & legal resources with thousands of prisoners nation-wide combined. CR-PDX is now working on expanding their prisoner mail correspondence to a state-wide effort for Oregon.

We’ve also been working to better connect abolitionist efforts across the US nationally and across different issues and communities. At the end of March, after major US cities entered different levels of quarantine to “Flatten the Curve” of the pandemic, Critical Resistance hosted a webinar called Organizing Against Toxic Imprisonment in the Face of COVID 19, in which organizers from CA to New York shared their work against imprisonment through different local campaigns fighting jails and prisons. This work has been done in direct solidarity with our loved ones and comrades locked up in jails, prisons and detention centers around the world. After this webinar, we released an Abolitionist Platform:  Toward Healthy Communities Now & Beyond COVID-19, through which we call for the intersectional efforts of anti-imprisonment, anti-policing and anti-imperialist struggles to coalesce concretely as a response to the COVID-crisis.

Since our webinar in March, our panelists continue to build this movement with us. Release Aging People in Prisons (RAPP) in New York, for instance, continues to target Governor Cuomo to “Let them Go” and “Free them All” by granting clemency to aging prisoners most vulnerable to COVID.

Decarcerate Alameda County — a coalition led by the Anti Police-Terror Project, Causa Justa :: Just Cause, the Ella Baker Center for Human Rights, Human Impact Partners (HIP), and Restore Oakland in CA — continues to advocate for freeing people from Santa Rita Jail, divesting from incarceration and policing, and investing in community health. Despite a major setback when the Alameda County Board of Supervisors voted to increase the Sheriff’s Office’s budget by $106 million/year in May, the coalition continues to grow and build collective power with people within and beyond jail walls.

Similarly, Chicago Community Bail Fund (CCBF) is working with other local organizations to push the Cook County Board to defund Cook County Jail and invest in Black communities. CCBF and partners have mobilized Chicago communities to testify to the board, organize an action outside the jail attended by hundreds of people, and gotten positive press coverage (even from a right-leaning paper!) that helps shift public understanding of how we create real community safety. Because the county expects revenue shortfalls due to COVID-19, the anti-imprisonment fight in Chicago may be battling to prevent cuts to services rather than winning new investments, but CCBF remains committed to ensuring austerity hits the jail rather than community programs.

In the words of Laura Whitehorn, a former political prisoner, long-time freedom fighter and another panelist of our March Webinar representing Release Aging People in Prisons (RAPP) in New York:

“We need to fight like hell […]. In a moment like this where there is tremendous disaster, either the ruling class, the police, they all get stronger and stronger, and the corporations, or there’s room for, dare I say, revolutionary justice to be talked about. So release them all.”