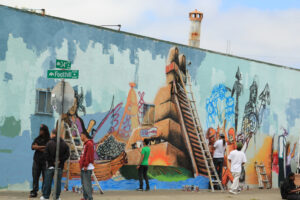 The first half of 2012 has given us a chance to build on the momentum of last year’s victories and plant seeds for further gains.  Throughout the struggle against injunctions, our demands extended beyond just a particular police practice or policy and included a call for increased self-determination in building healthy and secure neighborhoods.  The incredible momentum we built up through our work in STIC has allowed us to pour into the community support projects that speak to the needs, wants, and dreams of the communities targeted by the injunction zones.   In North Oakland we continue to build our relationship with a community center that provides vibrant youth programing despite the threat of closure due to budget cuts, and have become a key partner in a neighborhood effort to fight gentrification and advocate for food justice.  In East Oakland CR is honored to partner with the Aztlan Beautification Movement, conceived of and led by two people targeted by the gang injunction in that neighborhood.  The group maintains a community garden and painted five murals in the neighborhood, with plans to do several more.