It is with great joy that we welcome yesterday’s news that longtime Puerto Rican freedom fighter and political prisoner Oscar Lopez Rivera, as well as imprisoned whistleblower Chelsea Manning, will soon be freed. President Obama’s announcement of the commutations of their sentences did not come spontaneously or out of his good will, but as a result of decades of organizing and struggle by people demanding and working for the freedom of political prisoners.

We at Critical Resistance join people everywhere in celebrating this victory, and uplift our movement leaders and fighters who 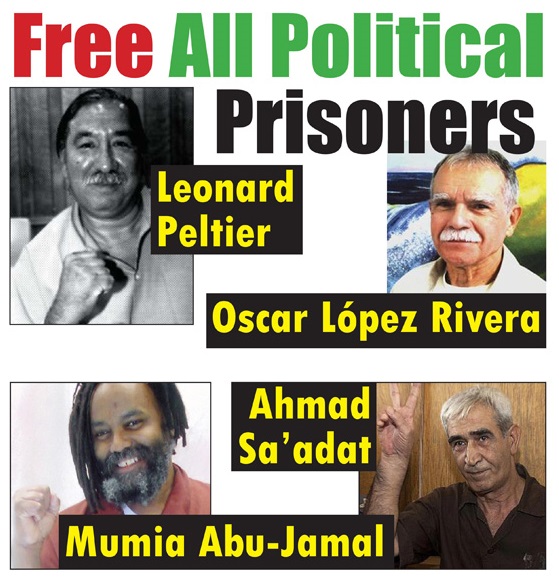 remain locked up, many of whom have been caged for more than 30 and 40 years. Our fight for abolition recognizes that a central role of the prison industrial complex is to repress our movements, and imprison and kill those who effectively resist. Like Rivera, these political prisoners embody revolutionary vision, the spirit of internationalism, and the desire for a world free of imperialism, oppression, and state violence. Image: Samidoun

We continue to raise the names of Dr. Mutulu Shakur, Leonard Peltier, and the many, many more who have dedicated their lives and remain steadfast for Black liberation, indigenous resistance, and third world struggle and solidarity. With the Trump regime coming into power just two days from now, these fights will undoubtedly become more difficult, so we strongly encourage everyone to visit the links above and to take action today to support efforts for political prisoners’ freedom.

Above all, we are deeply inspired by yesterday’s victories, as they show the power of sustained organizing and resistance. That people’s movements are able to gain freedom for two individuals who were deemed enemies of the state is no small feat, and allows us to see what is possible. The majority of Obama’s commutations have been for those imprisoned for non-violent drug offenses. And while we welcome all imprisoned people coming home, we remain steadfast in our work towards abolitionist reforms that shrink the prison industrial complex and touch the lives of all those imprisoned, regardless of level of charge or classification.

As we move into a political climate that appears bleak, these victories give us hope, and remind us of why we must double down on our struggles against imprisonment, policing, surveillance, and on movement building toward liberation in light of what is to come in the coming days and years. In the words of Rivera “It is much easier not to struggle, to give up and take the path of the living dead. But if we want to live, we must struggle.”